Reggie Williams on NFL.com, fighting to save his leg

Share All sharing options for: Reggie Williams on NFL.com, fighting to save his leg 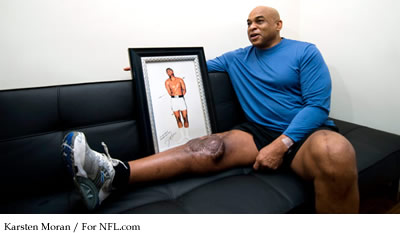 He traveled from his home in Orlando to New York on April 14 for surgery on his right knee to clean out infection from a previous surgery. He was scheduled to spend three months here. But one surgery turned into nine surgeries since April to clean multiple infections, the last surgery on Sept. 5. His New York stay is growing on seven months now.

Even through all that, he still loves the Bengals (and the fan base) enough to talk Bengals football.

"The Bengals have had way too many distractions," Williams said. "I believe that the real work of a championship team takes place in the offseason. The real job of winning games comes in the fourth quarter. It’s hard to win games when you have the sense that some players can’t wait to get out of Cincinnati. In the season, players from 32 teams compete for one thing. In the offseason, these 1,700 players talk to each other about their employers. The Bengals have to increase their chances of getting more quality individuals and players. If they go 0-16, that would be a new hurdle. A new, deeper cut for all of us. Leadership is about finding solutions and not finding blame."

Hopefully every player on the 53-man roster reads that, realizing how their performances effect the legends of Bengals history. Then again, that was a different time, when legends were made. And players and tradition went hand-in-hand.

For those of you that don't know Williams, here's a quick bio. He played with the Bengals between 1976-1989 (14 seasons), recorded 62.5 career sacks and appeared in the Bengals two Super Bowls. For more, watch NFL.com's video of his journey.

In truth, I was 11 years old when Williams retired; I missed most of his career. A call out to our veteran fanbase. Explain to everyone else what Williams' was like and what are your best Williams' stories?