One of the craziest plays Sunday happened in the third quarter when Andrew Whitworth and Jaguars defensive tackle John Henderson were ejected from the game.

“We had gotten in a tussle after a run play and he came up and took a shot at the back of my head," Whitworth recapped. "Levi (Jones) was screaming at the refs for a flag. And when he stood up, he pushed me again in my facemask, and the ref still didn’t throw anything. So on the next play, he wanted me, I wanted him, and he kind of ‘swam’ me. I just pushed him past the quarterback and he fell to the ground, but he held onto my facemask and ripped my helmet off.”

Henderson got Whitworth in a headlock, while trying gouge out Whitworth's eyes. “He was digging in my face pretty good. I was trying to get his hands out of my face in case he ripped my eyeballs out.”

Marvin Lewis didn't endorse trying to save one's eyes from being "ripped out". “The hard thing there, and the thing that you have to do as a professional player, is walk away. There is no retaliation on an NFL football field. You have to walk away. Let him get the penalty, let him get kicked out of the game."

In our view, it's ridiculous that Whitworth was ejected, clearly defending himself from turd-like antics of Henderson. Because the refs have to keep some control of the game together, and since typically retaliation is always a sure-fire towards escalation, we can understand the personal foul.

Furthermore, we think that Marvin Lewis is dead wrong condemning Whitworth's actions, who was clearly defending himself. Whitworth felt he had no choice. “In that situation, I don’t know what else you can do as a player if a guy’s got his fingers digging in your face. It’s either, OK, I’m going to get fined or in trouble or this guy’s potentially going to ruin my career. So I had to defend myself there,”

Since the YouTube video (below) doesn't actually show anything, here's some screencaps of it (and the quality isn't good... at all). 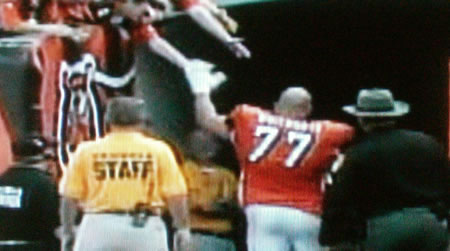 Props to CincyMike56 for the better video.