Bearcats beat the gantlet, one step closer to Orange Bowl; Pike will play in the NFL

Share All sharing options for: Bearcats beat the gantlet, one step closer to Orange Bowl; Pike will play in the NFL 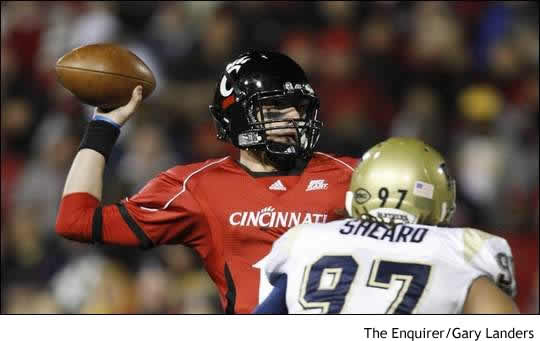 It's because you're a superstar, you superstar. If you were one of the fans crashing the party with ticks left on the clock, then Paul Daugherty talks down to you with the utmost contempt. He writes that "most all of them lubed, all of them (irresponsible) and selfish, don't especially care about the well being of others, or even how they could jeopardize a game's outcome. They're just out there, raising hell and feeling entitled." We think that genuine joy continuing a tradition that's existed for generations among every football team at one pinnacle peak during their historical program, is fine. As much as entitlement comes in beating up on the local professional teams, so does a fan's onslaught of celebration checking off another item in the Big East championship run. Forget a moment that the clock appeared expired for the moment, or forget that the fans stampeding the crowd, just for a moment. Cincinnati's football team is the story in the area right now; as is Elder and Anderson playing for the Division one and Division two championships this weekend.

"You saw it," said defensive end Connor Barwin, who had three of Cincinnati's season-high seven sacks. "It was crazy. I was surrounded by fans asking to take my picture, shaking my hand. I couldn't get back to the locker room."

Barwin had three sacks Saturday night. It was a party, even though Daugherty attacks UC fans at Nippert Saturday.

With a putrid rushing offense (2.3 yards per rush), the Bearcats receiving duo of Gilyard and Dominick Goodman (who owns the record for receiving touchdowns), each over 100 yards receiving and a touchdown, were benefactors of Pike's career performance. He was outstanding. After missing games against Marshall and Rutgers with a broken arm, and a terrible performance against Connecticut (feeling the affects of said broken arm, sitting after half time), Pike went on to cruise through the gantlet (see below) which doesn't include a combined 43 of 58 for 561 yards and five touchdowns with no picks against Miami University and Akron before the injury.

He's six-foot, six. He's over 200 pounds. He's a junior. His career won't be finished once he graduates from Cincinnati. 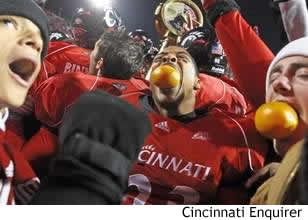 The Gantlet is an avenue of two paths. After losing to Connecticut 40-16, this blogger held reservations of surviving a gantlet of games against South Florida, West Virginia, Louisville and Pittsburgh. The gantlet suggests if you win all four, the world is yours. If you don't beat the gantlet, the gantlet beats you. After handling South Florida, the Bearcats nearly had the collapse of all collapses against West Virginia, pulling out a three-point overtime win. They played down to Louisville for much of the game, and made the Pitt game less competitive than we expected.

Celebrate as one should, but not so much that we suck more than Notre Dame. If they beat Syracuse, UC is going to the Orange Bowl. It's premature, but the Orange freakin' Bowl!

Tony Pike turned in a career performance against Pittsburgh, completing 26 of 32 passes for 309 yards and three touchdowns... After a 28-21 beating over the Pitt Panthers, the Bearcats moved up to 16th in the BCS... The Bearcats honored Ben Mauk before the game against Pitt... If it makes one feel well to spin facts, then this should be near euphoric; Texas Tech couldn't do what University of Cincinnati Bearcats did -- keep the margin under 30 points... Thanks to Pat White and West Virginia, the Bearcats were unable to clinch the Big East title Saturday outright. Now they have to beat Syracuse... Brian Kelly doesn't care about other job offers, and he wouldn't have it as good any place else other than UC, who is 20-5 (.800).