Mike Mickens out for the rest of season; hopes to return by Bowl game.

Share All sharing options for: Mike Mickens out for the rest of season; hopes to return by Bowl game. 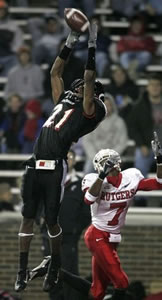 The Bearcats were without cornerback Mike Mickens, arguably the team's best defensive player, against Pitt. On Monday Mickens went under the knife to "repair torn cartilage in his left knee", and will miss the two remaining games against Syracuse and at Hawaii. Kelly hopes to have Mickens back by their bowl game, whatever that is (uh-hum, Orange Bowl, uh-hum).

Mickens won't be the top cornerback drafted, though I argue he could be with a certain Buckeyes fanatic family member. In his fourth season, Mickens has accumulated 14 career interceptions, three returned for touchdown. This year he leads the team with 66 tackles (even with missing Pitt), and nine passes broken up.

Football expert mocks that Mickens will be the third cornerback taken late in the first round. His size could be turn teams off, but not his heart and physicality. New Era Scouting ranks Mickens fourth in a strong cornerback class, ESPN ranks him ninth, but says he lacks top-end speed and ability to shed blockers against bigger receivers.

Here's a nice little "Highlight" of Mickens against Marshall earlier this year.