If you're still a Bengals fan after that, I salute you

Share All sharing options for: If you're still a Bengals fan after that, I salute you 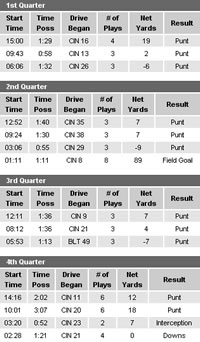 Bengals offense is passion of love terrible. Excluding the eight-play, 89-yard drive that closed out the first half with a field goal, the Bengals gained 66 yards on the game's 45 other plays, averaging 1.5 yards-per-play. Eight of 14 drives went three-and-out, 11 ended with a punt and three ended with an interception, turnover on downs and a field goal respectively.

If a highlight film were shown to a symposium of rookie coaches, the Bengals would be featured as a benchmark of how to flawlessly orchestrate one of the league's worst offenses. Take the team's first six possessions. Even though the Bengals started the game with an 18-yard pass to Chad Johnson, the Bengals recorded 20 yards total, on 19 plays; two drives gained negative yards, all ending in punts. During a stretch of nine possessions, the Bengals ran three-plays-and-punt eight times picking up five total yards. Ryan Fitzpatrick sneaked on a third-and-short scenario converting the Bengals first third-down situation with 13 minutes left in the game.

You know an offense is bad when they...

Mark the entire offense "terrible" across the board. Passes batted at the line of scrimmage, fumbling the football without contact, throwing a dud when he meant to double-clutch, Ryan Fitzpatrick is not an NFL quarterback, personally nominating him among the worst quarterbacks in Bengals history; notably those played in the 90s not named Boomer Esiason. With three minutes left in the game, Fitzpatrick was finally pulled for Cincinnati's most popular younger brother, Jordan Palmer. His first attempted pass, and only completion in the game, went for a pick-six to safety Jim Leonard; his first interception of the year and career touchdown. Center Eric Ghiaciuc doesn't belong in the NFL either, and if all things being equal, Nate Livings proves he's a third guard on the depth chart. Injuries force Livings into the lineup, stupidity forces Ghiaciuc. And I believe that Chad Johnson is simply going through the motions, Chris Henry was given a spot on this team, not through performance or talent, rather size and that Ben Utecht is just as disappointing as any in the NFL.

Don't paint me colors because I hate being painted colors. I'm not a trooper. I didn't sit through the entire game, mindlessly starting choirs during the back-half of the fourth quarter. This is the first game in which I didn't complete the game, not just here on this site, the couch too. I'm having a hard time looking forward to these games, typically a beat-down incorporating the league's worst talent in Cincinnati, and, in some cases, coaching. If you saw the game, then you know my struggle to put things together, recapping the game for this site. If you didn't, then it's a good thing. We're one of the worst offenses in the league, and taking a serious toll on my fandom.