Bengals really need to have Houshmandzadeh back next season

Share All sharing options for: Bengals really need to have Houshmandzadeh back next season 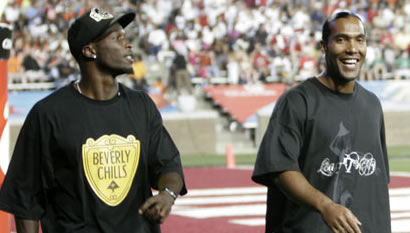 It's generally believed that the Bengals will slap the franchise tag on T.J. Houshmandzadeh, because the two sides are "far apart" at the negotiating table for a long-term deal. Houshmandzadeh, who leads the Bengals in virtually every reception category the past two seasons -- like receptions (201), yards receiving (2,028), first downs (119) and touchdowns (16) -- is also among league leaders in several categories this season; considering we're the worst offense in the NFL, that speaks measures.

“To get to where we want to go, it’s very, very, very, very important that T.J. comes back because he’s an integral part of this offense. T.J. and I are completely different types of receivers. He does things that I wouldn’t do. The way T.J. plays the game, it’s with a very, very … I don’t want to say reckless … but if I was to try to play the way T.J. plays, I would end up in the hospital in Week 2 or Week 3. Something like that. We complement each other so well and to have that change up, I think it would really be a big blow to this offense and the organization — period.”

At the same time, I'm not sure the Bengals want to give him a long-term deal worth his asking price because of his age; not the actual cost of the deal. But more importantly, there could be a concern because of his style of play; calling him tough, would be a disservice to him, and a major understatement. I still believe he's one of the best receivers in the NFL, based on the fact he uses several dimensions that other receivers can't (like his smarts).

And I absolutely don't blame Houshmandzadeh for seeking big-time first receiver money. This will likely be his last shot at getting that big payday that every major player gets at least once in their careers. In this economy, you got to do what you got to do.