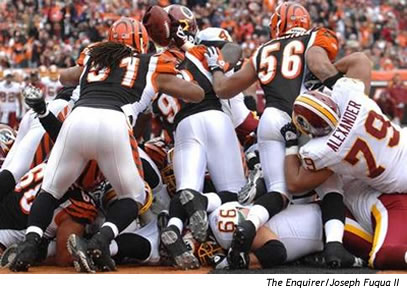 Just when Corey Mays thinks he can break through the team's depth chart this off-season watching guys like Landon Johnson, Caleb Miller and several other linebackers depart for free agency (most haven't even attached to other teams), he watches the team draft Keith Rivers and sign Darryl Blackstock and Brandon Johnson, further limiting his potential playing time. Inclusive is an injury suffered earlier in the season that decreased his already limited playing time, standing in street clothes on the sidelines watching games unfold.

Mostly a special teams player, today Corey Mays was the man of the game on defense. On second-and-goal with 6:27 left in the third quarter, the Washington Redskins line up big formation with one yard to-go for the touchdown. When Mike Sellers got the handoff, he was stuffed around the line of scrimmage, nearly a full yard short of the touchdown. The refs called a touchdown anyway thinking he was atop someone else, which Marvin Lewis challenged immediately. The Bengals won the challenge and Sellers was called when his knee touched the ground with the football just two feet shy of the touchdown. Mays was credited with the tackle.

So the Redskins line up same formation, third-and-goal and hand off to the fullback again. Guys like Rashad Jeanty filled the gap at the point of attack, limiting Sellers rushing lane. So the full back tries to leap while leaning the football out unprotected, which never broke the goal line. Instead, Mays forces the fumble, who then recovers it on his own and comes out of the pile with the football.

This was significant because the Bengals were only up 17-10; a touchdown would have tied the game. However, the Redskins never had another opportunity to score a touchdown for the rest of the game, simply exchanging field goals in the second half.