Bengals win, Bengals win: Dominated the first quarter, sealed it in the fourth

Share All sharing options for: Bengals win, Bengals win: Dominated the first quarter, sealed it in the fourth 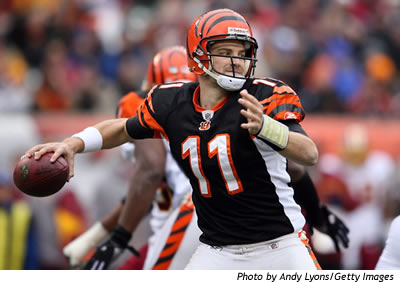 In truth, I've lowered my expectations of Ryan Fitzpatrick. I think evident this afternoon, was simple contributions to an (at times) ineffective offense in the second and third quarters -- he only completed seven of 16 pass attempts for 76 yards. In the second quarter, the Bengals had the ball two times (the third being a knee to end the first half), going three-and-out and picking up zero yards. In the third quarter, while picking up first downs, punted both times they had the ball -- 35 yards being their best drive.

On the Bengals first drive, not a single pass attempt was made. Cedric Benson rushed for eight and seven yards respectively (not back-to-back). Andre Caldwell took on an end around, on second and two, cut up-field once he realized that little existed on the outside, picking up four yards and the first down. On first-and-ten at the Washington 15-yard line, Fitzpatrick scrambled outside to the right, staying in bounds, dodging defenders, going down at the one-yard line. That set up a naked boot leg to the right, which Fitzpatrick took into the endzone, untouched and unchallenged, for the game's opening score.

After going three-and-out on the second drive, the Bengals were stuck on the six-yard line, clearly losing end of field position after an exchange of punts. After Benson picked up 11 yards on two rushing attempts for the initial first down, Fitzpatrick threw a deep pass down the right sidelines, two steps overthrown. After completing a 22-yard pass to Chad Johnson that was nullified after an Anthony Collins hold, Bob Bratkowski called a running back screen to the right. Dodging a tackle, Benson sprints down the right sidelines (with great blocking from the offensive line and Chad Johnson), tackled 79 yards downfield.

After Benson runs up the gut for a limited one-yard gain, Fitzpatrick floats a pass down the left sidelines from the Washington 12-yard line targeting Chris Henry at the back of the end zone. Nice throw, great over-the-shoulder catch, Bengals 14-0 on the touchdown.

The Washington Redskins went three-and-fumble (that led to the Bengals first offensive touchdown), and then three straight three-and-outs.

In the first quarter, Cedric Benson recorded 120 yards from the line of scrimmage (41 yards rushing on 7 attempts and 79 yards on one reception). Fitzpatrick completed three of six pass attempts for 93 yards passing and a touchdown (135.4 passer rating); also rushing for 17 yards giving him 110 yards contributed.

If the first quarter is when the Bengals won the game, then they sealed it in the fourth. With 9:33 left in the game, the Bengals offense took the field, ran 16 plays, 41 yards (which includes Chad Johnson's 15-yard penalty for taunting), absorbing 7:13 off the clock -- all on that drive -- all but icing the Redskins shot at making a fourth quarter run.

This allowed only one possession by the Redskins after Rock Cartwright returned the ensuing kickoff 87 yards, saved by Leon Hall at the Cincinnati 13-yard line. The Redskins didn't gain a yard -- no-gain rush by Clinton Portis rush then back-to-back incomplete passes (the first encouraged by Darryl Blackstock bringing him down in the middle of his throwing motion). The Redskins kicked it out of bounds after the field goal to bring the score within one possession, and Ryan Fitzpatrick took three knees and the game was over. Over, baby. With the Bengals winning.

Here's the numbers in the fourth quarter.

Fitzpatrick was also key in the fourth quarter, completing six of seven passes to five different receivers; two of which were completions on third down to Houshmandzadeh. Fitzpatrick also converted a fourth-and-short with a quarterback sneak after a shovel pass that predictably didn't gain much yardage (much less a first down).

That seven minute drive sealed the win for the Bengals. Not only did it end with a field goal, giving them a ten-point advantage, but it took seven minutes off the clock forcing the Redskins to score a field goal and touchdown with just over two minutes left in the game.