Houshmandzadeh only had 19 yards receiving, but converted two critical plays for the win

Share All sharing options for: Houshmandzadeh only had 19 yards receiving, but converted two critical plays for the win 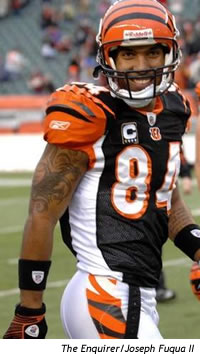 After catching a two-yard pass -- a quick hit to the left -- with nine minutes left in the first quarter, Houshmandzadeh went two full quarters without being a factor. Then, he caught his second and third passes on the Bengals seven-minute drive that eventually sealed the win. Both receptions, nine and eight yards respectively, were huge in that they were receptions on third downs that converted first downs, sustaining that drive.

That third reception was classic Houshmandzadeh. After catching the pass 4-5 yards before the first down marker, Fred Smoot knocked Houshmandzadeh's balance off, forcing our boy to twist, turn, propel with fingers and hands, eventually leaning out for the first down.