Cedric Benson gains 120 yards from scrimmage... in the first quarter!

Share All sharing options for: Cedric Benson gains 120 yards from scrimmage... in the first quarter! 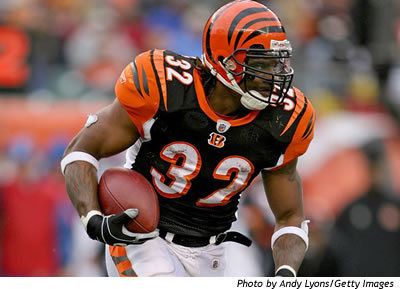 Now that we got our bigger stories out of the way -- the ones where I say nine different plays/players clearly won the game -- we have to get some acknowledgements out of the way. This is like incoherent thoughts about the game and sometimes meandering off-course, though we want to clearly point out that this hardly means they were lesser than anything than the whole of the parts. But in the end, we tend to go all over the place. If you're a long-term reader, you've resigned to that fact long ago.

Bengals screen passes never work. Benson says Bull S%#t. Coming into Sunday's game, Cedric Benson had gained 100 yards from scrimmage, only one time; predictably, his 109-yard effort against the Jacksonville Jaguars. Since then, he's knocked out yardage totals of 79, 39, 18, and 58 leading into Sunday's contest. For those of you ready to correct me about the incorrect rushing yardage figures, we're talking total yards. And to confuse you, we're now going to talk about rushing figures. Worse, since his 104-yard rushing performance against the Jags, Benson had rushed for 50 yards once in the past four games; 57 yards rushing against the Colts.

Then, Benson went nuts. Even without his 79-yard screen pass reception, Benson still gained 41 yards rushing on seven attempts -- 5.9 yards per rush (that has to be some quarter-record, right?).

When the game concluded, Benson finished with 161 yards total offense -- only 41 yards tact onto his 120-yard performance in the first quarter. Benson, like much of the offense, exploded in the first quarter; Benson especially who contributed for 77% of the offensive production. Afterwards, the entire offense took a breather in the second and third quarters while finally sustaining a long seven minute drive to seal the game.

Still, even though he didn't score a touchdown, Benson's first quarter performance has to go down as the best single-quarter outing of any player this season. Ironically enough, it was Fitzpatrick that scored the Bengals two touchdowns in the first quarter; though without Benson's contributions, the Bengals as a whole gain less than 40 yards.

Let's put this in greater perspective. Those four games account for 44% of the team's passing yards all season and 50% of the season's passing touchdowns. Oh, and of the total points we scored this season, 45% came against the NFC East.

The birth of a Chris Henry effort. Many came away rather pleased with Chris Henry's effort Sunday. Even though Henry recorded a touchdown on four receptions for 54 yards receiving, he prevented two interceptions, tracking poorly thrown passes and conflicting the effort of the defender to pick the pass. Many also took note of his hustle downfield looking to block (aka, getting in the defender's way) while Benson was breaking his 79-yard screen pass.

This is not the (off the field) idiot that lacks effort that Chris Henry had become in the past 2-plus years; this is clearly the Chris Henry Bengals fans expected all along. On the block: “I saw where Ced got out of that one tackle I just kept busting my butt to get down field to help. I just tried to get in the guy’s way.”

Thinking about Tomorrow, with another Chris. Chris Crocker finished Sunday with 10 tackles (tied for team high with Brandon Johnson) and forced a fumble that led to the Bengals opening touchdown. Crocker has started each of the past four games, recording eight tackles or more in two (Steelers, Redskins) and 25 tackles in those starts. Also consider this. Crocker is only one of three Bengals (Chinedum Ndukwe and Brandon Johnson are the others) that's recorded a sack and an interception this season. And he did that in the past five games.

Crocker will be a free agent after this year. Dexter Jackson is signed through 2009 with a $1.5 million base salary due next season. Do you sign Crocker to a few seasons and release Jackson? Actually, yea. Yea, you do (note: this was brought up in the comments).

C Trent calls the Redskins "Racist Nicknames". Clever... Lance begins his post-game post by questioning the win (his in-game thoughts are spot on)... Don Banks praises Cedric Benson while ripping into Clinton Portis... Mays fumble was the key. Not many have reacted at this point, so that's it for now.

Geoff Hobson counters a Jay Glazier report that the Bengals finally set Carson Palmer down for the season. Hobson says that "the Bengals said Sunday night that he has not been ruled out for the final two games."

The Bengals will look at free agency (not the draft) for defensive tackle help once John Thornton leaves for free agency. My money is that the Bengals will make a small 2-3 year offer that doesn't hurt the cap if he's released a year after that (2010).

The Bengals will now pick #4 in the 2009 NFL Draft. Now, if the Browns lose on MNF and the Bengals beat the Browns, while the Raiders and Seahawks lose, there's a chance (not concerned with time figuring tie breakers with Oakland and Seattle), the Bengals could be picking as low (or high depending on how you look at it) as 7th.

WDR "revealed" their sixth task. If that doesn't annoy Mike Brown, I don't know what will! If you went to the game...

The Patriots were up 29 points late in the fourth quarter and Bill Belichick challenged a play, which further proves that some fans and media sit on such a soap box that it makes me sick (talking about his character). Winner. That. Is. All. That. Matters.

However, I agree. Ravens fans got screwed. Badly.