Carson Palmer is cutting the football loose; Leon Hall is among league leaders in something

Share All sharing options for: Carson Palmer is cutting the football loose; Leon Hall is among league leaders in something 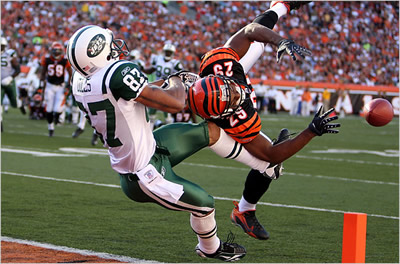 The play of Leon Hall can either really blow your mind, or just blow. Against the Redskins, he was twisting, turning, breaking three steps late with the receiver fearing deeper patterns which opened underneath crossing, hook and out patterns. Last Sunday, Hall was yards behind Santana Moss during his touchdown reception, running a deep square-in route. When Moss ran five yards and sat, Hall additional time to recover because he was selling out to defend the deep pass. Defending the big play isn't a bad thing, but it's typically a 5-10 yard gain each time.

Then there's another Leon Hall. He's the guy that hurdles full grown men to slap a pass incomplete. He's the guy that breaks up deep pattern passes with a flip of the hand, or a wildly uncontrolled and parentally unadvised body dive. This is the same Leon Hall that's one pass defense away from leading the NFL; he has 20, Carlos Rogers and Corey Webster are tied with a league led 21 (stats via Stats, Inc).

The knock on him remains solidly true and justified; he just allows to many receivers to catch passes (see below).

Still shutout this season, after intercepting five passes last season, Hall's decreased interception production could be a result of a defensive philosophy. Since 2003 (aka, the Marvin Lewis era), the Bengals have intercepted 14, 20, 31, 19 and 19 passes respectively. This season, the Bengals have eight picks by eight different defensive players; five defensive backs, three already on IR. We presume the ineffective blitz based on Mike Zimmer's scheme, combined with absolutely no pass rush from the front four, isn't ideal for a cornerback sitting on an island for over five seconds; so we have a hard time giving Hall too much grief -- being owned by Mark Clayton (Mark "freaking" Clayton) notwithstanding. In the end, along with the likes of Jamar Fletcher and David Jones, it's Leon Hall taking the reigns from Johnathan Joseph as the team's best cornerback (totally my opinion). Left alone, while the quarterback sits in the pocket, unconcerned about the Bengals pass rush for a fortnight, Leon Hall becomes very average. 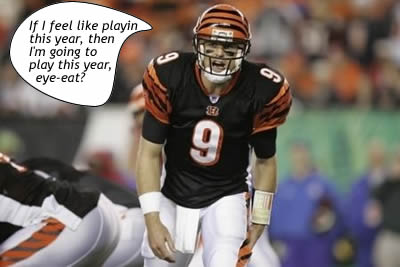 I understand the point that there's nothing left Palmer can play for this season. I've even questioned why the team just doesn't sit him for the season, open a roster spot for another young, off-the-street player like Chris Crocker, or Dhani Jones last season. Then again, fans preaching about a professional football team with an owner that's a bigger threat to Cincinnati than Manbearpig, is a waste of time, money and breath, isn't it?

However, Palmer's rehab is looking great; not from the perspective that he'll play this season, rather he'll certainly be ready for next season -- as promoted by Marvin Lewis during his Monday Afternoon Press Conference:

Q: So, the FOX report that Carson Palmer has been shut down for the season is wrong, then?
ML: I don't know what the FOX report says. But the thing about it is, we've got two weeks left. I'm not going to sit here and say Carson is going to play in the games, but he is doing well, and we have a chance to still progress him another step further and closer.

Q: Carson says it's important for him to have a chance to play. Is it important for you to see him throw, even if it is just practice?
ML: I watch him throw every day. It would be fun for him to get back into the practice routine of being out there totally with the guys, and that would be good. Again, the healing process is going well, and we don't want to do anything to jeopardize that. So the decision will be made based on that. We don't want to have somebody inadvertently run into him, or anything like that at this point, when we've waited so long and we are where we are with only two weeks to go.

Q: Earlier, there were some real doom-and-gloom scenarios thrown out there about Carson:
ML: Well, none of the doom and gloom was thrown out by us. I think our message, just like when he injured his knee, has been very consistent. There's always going to be another side of the story, because if everything was going to be good, it wouldn't do people any good to talk about it. But I think our message has been pretty consistent.

Q: Can it be said, then. that surgery isn't necessary for Carson at this point?
ML: Well, that's been said. You can say it again if you want.

Q: But it's final?
ML: I don't think anything will be final at any point until he's back at 100 percent playing.

The key phrase during the press conference is that, "he can cut it loose." No sweeter words have been spoken by a suspiciously optimistic head coach to a bunch pessimistic Bengals fans. At least, from my point of view. Palmer could be throwing footballs against the defense this week, which is good and bad. Good that he's obviously throwing the football against the defense. Bad that Ryan Fitzpatrick, if he's starting, will get fewer repetitions (if that really matters).

Still, unless you're annually bitter about the ownership of this team, and believe me, I'm with you man, then this should come as good news.