Marvin Lewis nominated for Head Coach of the Week

Share All sharing options for: Marvin Lewis nominated for Head Coach of the Week 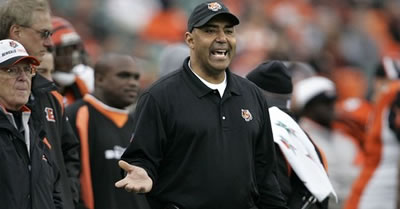 Every Tuesday, the NFL releases the nominations for defensive, Air and Ground, Rookie and Head Coach for their sponsored awards. We haven't promoted much of that this year because, well, that should be obvious; the nominations have been limited. Marvin Lewis was nominated for head coach of the week after the Bengals first win against the Jacksonville Jaguars. Mike Tomlin won it. Corey Lynch was nominated for rookie of the week after he picked off a Brett Favre pass during the Bengals 26-14 loss to the New York Jets. Matt Ryan won it. From a quick search, we believe that's it. If not, we're sure someone will help us.

This week, the Bengals head coach becomes only the third player/coach nominated for a weekly award this year after beating the Washington Redskins 20-13. Others nominated are Gary Kubiak (who beat the Titans) and Wade Phillips (who beat the Giants).

As far as we can tell, the last player to win a weekly award was Chad Johnson winning the AFC Offensive Player of the Week when the Bengals destroyed the Tennessee Titans in 2007. Johnson caught 12 passes for 103 yards receiving and three touchdowns. Good god, that looks good, doesn't it?