Whatever happened with Kenny Watson this season?

Share All sharing options for: Whatever happened with Kenny Watson this season?

Watson has touched the ball 17 times this season. 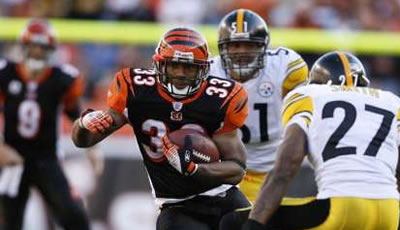 Even though Kenny Watson has played in only three of the past five games, he hasn't touched the football since the Bengals 21-19 win over the Jacksonville Jaguars. From our perspective, it's been somewhat surprising that Watson has been limited in his touches this year (13 rush attempts, three receptions), resuming his original duties as third down blocker. Still, in 2007 when Kenny Watson led the team with 763 yards rushing, he had the highest yards-per-rush (4.29) by the team's available feature back since Rudi Johnson averaged 4.33 yards-per-rush in 2005.

Watson has rushed more than once in three games this season; in the first loss to the Pittsburgh Steelers, Watson recorded a season high five touches, which includes a season-high 17 yards rushing. In seven games last season, Watson recorded 55 yards or more rushing the ball seven times. This season, he has 55 yards all season.

We've always understood his role, and admittedly, injury has played a large factor limiting his carries. After last season, you'd think he would touch the ball more than 17 times at this point in the season.