This is Dwight Freeney, Anthony Collins

Share All sharing options for: This is Dwight Freeney, Anthony Collins 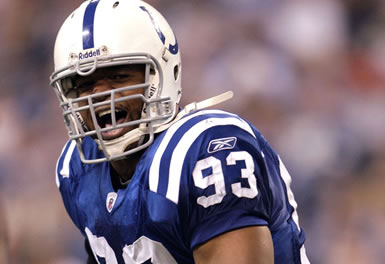 With 6:08 left in the third quarter, after a 15-play drive by the Colts that milked 8:45 off the clock, Anthony Collins sat in pass protection on first down. Freeney pushed the rookie left tackle backwards, forcing Ryan Fitzpatrick to spin out left and do his customary hope-to-god for some scramble yards. Dwight Freeney tracked down Fitzpatrick from behind for the sack.

On the following play, Freeney badly disrupted a Cedric Benson rush, colliding with the running back as he gets the handoff. Collins tried to push Freeney out, like solidifying a passing pocket, but Freeney's strength to get to Benson was overwhelming. Collins was called for holding anyway. On the dump off pass to Benson, Collins held his own on Freeney who spun and Collins sat back waiting to reengage. On third and 29, Collins pushed Freeney past the pocket, while Fitzpatrick's happy feet forced the quarterback up in the pocket, looking to scramble rather than looking for any broken coverages -- you need 29 yards, you're not going to pick that up scrambling out of the pocket.

As per the Colts, combined with a tiring defense, Peyton Manning connected with Marvin Harrison on a 67-yard pass in which Jamar Fletcher was slow, boring and uninspired allowing Harrison a passing pattern, five yards to his left. On the next play, Manning connected with Dallas Clark on a four-yard touchdown lob. Score: Colts 28-3, Game Over.