When someone confuses the words "game" and "season".

Share All sharing options for: When someone confuses the words "game" and "season".

(My internet connection at CJ headquarters - aka, dingy apartment - finally dropped for good last night. So now I'm at work, and can get my work for CJ done in record time) 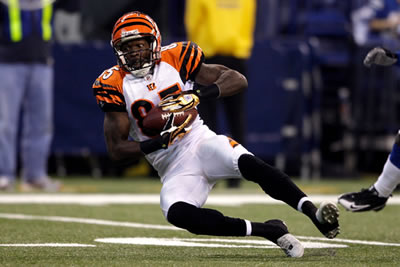 Not that I think it would change anything, but if they decided to start Jordan Palmer this week, I wouldn't complain.

No Chad, you didn't start. For the second time in the past three games, Chad Johnson didn't start the game. Unlike the Thursday night deactivation against the Steelers, Johnson wasn't on the field during the team's opening play going three-wide formation with Houshmandzadeh, Andre Caldwell and Jerome Simpson; confirmed on NFL.com's Game Book. C. Trent asked why he didn't start, to which Johnson said, "I started." Mark Curnutte uses the words "not 'medically related'".

Johnson recorded 79 yards receiving, his season-high. His last touchdown was on November 2; two in the team's 21-19 win over the Jacksonville Jaguars. The last time he caught more than five passes in a games was October 19.

Johnson is on pace for 62 receptions, 634 yards receiving and five touchdowns.

0 - Sacks by the Bengals defense.
1 - Has to be the only time in NFL history in which a team's record is defined by the number one, four times! (1-11-1). It's also a palindrome -- like RACECAR.
2.5 - Sacks by Robert Mathis.
3 - Tackles combined by Pat Sims (2) and Jason Shirley (1). Peko had five.
4 - Sacks combined by Mathis and Dwight Freeney.
6 - Yards receiving by Andre Caldwell on his lone reception.
16 - Tackles combined by Dhani Jones (9) and Rashad Jeanty (7 and a forced fumble).
42% - Third down conversion rate by Bengals offense (6/14).
57 - Yards rushing allowed by the Bengals defense.
57 - Yards rushing by Cedric Benson.

The Fifth WDR Task? More signs. Sadly, no one watched the game; it has the lowest viewing audience of the week. We've learned this year that Ian Eagle and Solomon Wilcox are CBS's team to pick up the worst weekly match-ups. Come to think about it, that designation could be Gus Johnson and Steve Tasker (we've had them several times -- too many).

Note to Fox Sports, Palmer has been the third quarterback all season.