Share All sharing options for: Wednesday afternoon links and notes

Bengal Stripes is right: the move to sign Henry has minimal impact (other than the butt of jokes) and only benefits the team. The money is going to be limited and if he fails to his 54,262nd chance, then he's gone. It's either that, or having two injured receivers with several rookies and young receivers that the coaching staff just don't trust right now.

Even though the Bengals signed him, National Football Post thinks that there's still only a 50% chance he's with the team when his suspension is up. Football is about making money. And winning games makes the most money.

Rudi Johnson still isn't practicing because of tightness in his hamstring.

Andre Caldwell and Pat Sims are walking with a boot and crutches after suffering injuries to their foot.

Marcus Maxwell is working both wide out positions (X and Z) while Glenn Holt is working the inside slot.

Bleacher Report says along with the injury, T.J. Houshmandzadeh is actually holding out for a new contract. That's news to me.

Finally, from Mo Egger's blog. A billboard, off the highway (I think) in Cincinnati. UPDATE: Prag says the billboard is in Covington. 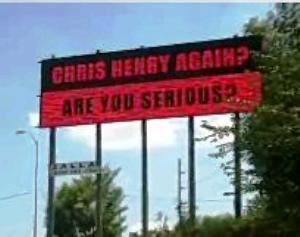