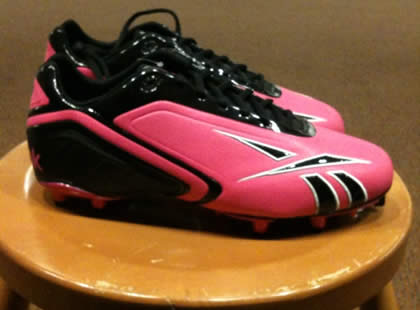 The NFL is celebrating Breast Cancer Awareness this weekend by allowing teams to wear pink uniform accessories, and naturally, Chad Ochocinco is all over the allowed uniform alteration, and then some.  According to the NFL's site, their support will last throughout October.

Throughout October, NFL games will feature players, coaches and referees wearing pink game apparel to raise awareness for the campaign, as well as on-field pink ribbon stencils and special K-balls and pink coins. All apparel worn at games by players and coaches and special K-balls and pink coins will auctioned off at NFL Auction, with proceeds benefiting the American Cancer Society and team charities.

Naturally, Ocho is taking this opportunity to go above and beyond, saying he'll be wearing his pink uniform accessories the entire month and will match any NFL fines with a donation to Breast Cancer Awareness fund. So yeah, more "look at me" isms from Chad, but at least this one is for a good cause.

Oh, and if any of you know who to get your hands on a pink mouthpiece and/or a pink chinstrap, send Chad a tweet because he's having trouble finding them.