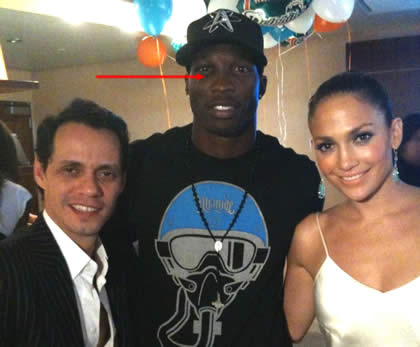 This, folks, is the price you pay for going across the middle against a Ray Lewis-led defense. No, I'm not talking about posing with Jennifer Lopez (who still looks good, BTW) and Marc Anthony. What I'm talking about is the bruised area under Ochocinco's eye, courtesy of Ray Lewis' attempted decapitation.

As is his way, Chad revealed his eye damage via Twitter, where he also told us how he got his shiner:

when my helmet flew off the face mask hit my eye

I notice Lewis, after last week's Tom Brady-inspired meltdown, hasn't said anything about the Bengals game.  Good thing, too.  Surely, he isn't disputing the personal foul penalty.  The defenseless receiver rule is probably more in the lines of good sportsmanship than the "You can only hit the quarterback in the chest" Tom Brady rule.