Cedric Benson Is A Predator

Share All sharing options for: Cedric Benson Is A Predator 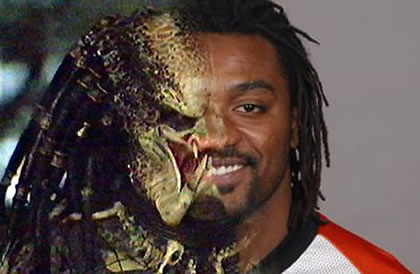 Something occurred to me while watching Cedric Benson hulk out on the Chicago Bears yesterday:  Cedric Benson is a Predator.  Yeah, the same alien that whipped Arnold's crew's ass, only this time, our Predator saves his beatdowns for the NFL, not those who are carrying military armament.

Maybe it's Benson's dreads that do it for me, but there are other similarities:

- Both wear battle helmets
- Both are well-armed, especially Cedric
- Both have powerful friends who watch their backs (see here)
- Both have natural camouflage
- Both have self-destruct mechanisms *
- You don't see either of them coming **

See? It's not just hyperbole from an awesome performance talking, either.  Granted, I doubt Chicago Bears fans share the level of complimentary descriptions I've made -- in fact, there's no doubt they'd like to be the ones who hunt him down and finish him off -- but there's not much you can do to deny a Predator-like 189 yards and a touchdown.

It's almost as if Ced the Pred specifically targeted the Bears for systematic destruction and his feelings spilled over on the rest of the team.  I'm not sure what else aptly describes Cincinnati's total domination against Chicago.

* Fortunately, we narrowly avoided Cedric's going off on the infamous boat trip.

** No one expected much from Benson, but now that he's a league-leader in rushing yards, his invisibility field probably doesn't work anymore.  No matter. You still have to stop him.