Carson Palmer's performance against the Bears was a career high; Bengals bring in new players for evaluations

Share All sharing options for: Carson Palmer's performance against the Bears was a career high; Bengals bring in new players for evaluations

It's been over a day since the Bengals put together perhaps their most complete game that we've seen since 2007. How do you feel now? Amped? Have you talked trash to all of your Pittsburgh Steelers fans, who lost to the Bears 17-14? I didn't. I just don't trash talk. It's not that I hate the act of talking trash, but I have better things to do. Like reading a Computer magazine while taking a number two during a blizzard while the heater is out. Well, giving a #2, as I always reprimand my cousin. Who takes a number two? You're giving it, not taking it -- and if you're taking it, well, there's issues that are far beyond this blogger's capacity to analyze. Welcome to the unabridged, unabashed encore version of our post-game review. Where, apparently, we dissect the phrase "taking a crap". Moving on.

The passing game was nearly perfect. The rushing offense was effective (I mean, really effective). The passing defense was strong; interceptions, sacks, quarterback pressures. And the rushing defense only allowed 35 yards, which is, at this point, a season best. Also season bests are points allowed (10), forced turnovers (4), rushing yards on offense (215), total yards (448) and points scored (45).

Hello, noobs. Joe Reedy writes that the Bengals have invited six players for tryouts, "including former Ravens TE Tony Curtis, who was cut a couple weeks ago." Additionally, Reedy writes:

The Bengals also brought in three defensive backs to evaluate – Brannon Condren, Emanuel Cook and DeAngelo Willingham.  Marcus Freeman, who was drafted in the fifth round by the Bears this year before being released, was in for a visit.

You can never take the big red ball off the clown. Nor can you take the clown off the big red ball. There are clowns that currently believe the Bengals were trying to run up the score by keeping Cedric Benson in the game while the game, well, clearly dominated in the fourth quarter. Some wondered if the Bengals were trying to give him a shot at 200 yards rushing. For one thing, Marvin Lewis isn't the type. With 3:48 left in the game, the Bengals had fourth-and-four at the Bears 28-yard line. If the Bengals elected to kick a field goal, they'd have a 48-10 lead. That is running up the score. Instead, handoff to Cedric Benson. No gain. Turnover on downs. Even if Benson picks up the first down, the Bengals would milk the clock and not score. That's Marvin Lewis. That's his respect for Lovie Smith.

Secondly, the Bengals had absolutely no other option. Brian Leonard was inactive. Bernard Scott suffered a knee injury. Jeremi Johnson left early with an injury. Who are you going to put back there? TheWalrus1971, Sloppygolf, laibach, Timzilla, Pragmatic, bodacio, Mehl, Jake, Carsonorbust, Jay, Danimal, Adam, Chris, Darren, Mike or firstPick? All are worthy candidates. However, all are questionable with fumbling tendencies. TarZander has a bum knee and cokane hasn't been eligible since Roger Goodell became commissioner. My point is that Benson was the only option and throwing just anyone back there, wouldn't benefit the Bengals at all. Perhaps next time we'll just keep Brian Leonard active.

Noteworthy: Shayne Graham kicked six PATs on Sunday. The total number of point after touchdowns in the past four weekends combined.

Caption Contest. Whomever comes up with the best caption, as voted on by your peers, will win some seriously awesome respect. 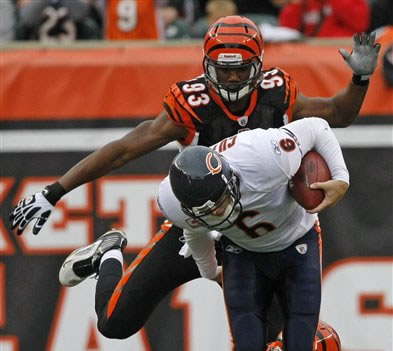