If one could sing a song about Bengals tight ends, it would be a country song. One position on the Bengals roster that's been the most tragic and frustrating, has been Tight Ends. Reggie Kelly and Ben Utecht were lost early during Training Camp. Daniel Coats, at the time on the outside looking in, was promoted as the starting Tight End by default while the Bengals signed J.P. Foschi off the street -- if for anything to add bodies to the depth chart. Chase Coffman hovered, not really making an impression on the Bengals, or even the fans. He's still hovering while he learns to block; or at least ready enough to take a special teams role.

Daniel Coats has 12 receptions, which ties a career-high that he set during his rookie season in 2007. But it's not the receptions that he's noted for. It's the drops and fumbles. As a result, J.P. Foschi has been promoted over Coats on the team's depth chart. Foschi has eight receptions on the season for 74 yards receiving and a touchdown (all career highs already). Note: Foschi's one touchdown is one more than Coats.

Foschi has impressed CincyJungle far more than Coats has; which could illustrate how unimpressive Coats has been. But I'm not sure if the Bengals will limit Coats' playing time as much as one would think. When the Bengals lined up Two-Fullback formation in the backfield, like a diamond with Jeremi Johnson and Coats side-by-side, the rushing offense was scary good.

A new business tradition: when you don't make money, try everything you can to make less of it. I'm not exactly sure how I should react to the Dayton Daily News' coverage of the Cincinnati Bengals. It's not that they've shut down coverage entirely. When the Chickster left -- they still have the Chickster's Twitter account on their front page -- I've found myself visiting DDN less; we've linked to their stories few and far between since. Tom Archdeacon writes Bengals related stories, but he's not really on the beat persay and most of the headlines are AP written stories. I can't tell you the last time I saw Carlos Holmes on DDN -- note: he could be on there, but the fact that I can't find him speaks measures. DDN does have a blog, but it's more like a collection of news stories, rather than opinion. But hey, I can't be too upset. After all, they do promote Cincy Jungle through Blog Burst just fine. Speaking of one DDN piece, I want to know, is this the definition of a bandwagon fan?

I grew up a Cincinnati Bengals fan, but lost interest over the years because I always felt owner Mike Brown treated the club as if it were his personal fantasy football team...

But the Bengals’ 5-2 start has gotten my attention. Carson Palmer is still one of the best quarterbacks in the league and he has surprised me with his mobility. After tanking last season, Chad Ochocinco appears committed this year (maybe the Bengals were right in not caving to his trade demands).

Offensive line coach Paul Alexander said of his offensive line, "To be honest with you, they’re beyond my expectations right now and unfortunately it’s made me greedy because now I’m shooting for the moon and they can be even better."

Loved this Geoff Hobson piece about center Kyle Cook, in which Carson Palmer says, "He’s a mini Richie the way he’s going." Richie is, of course, Rich Braham, long-time offensive lineman for the Bengals that was so good, he became the measuring stick for all centers on the team.

Speaking of Chick Ludwig, he expects the Bengals to offer Marvin Lewis a contract extension if the team makes the playoffs this year or next. Lewis' contract expires after the 2010 season.

Joe Reedy writes, "One obvious improvement in Palmer’s game has been his mobility, both in and out of the pocket." He's been rolling out, sometimes on purpose, sometimes because of the pass rush, finding open receivers. And when he's not finding open receivers, he's taking off. Carson Palmer has 44 yards rushing, which ranks third on the team. Furthermore, he's only three yards away from tying a career-high 47 during his sophomore season in 2004.

Under Marvin Lewis, the Bengals are 1-4-1 after the Bye Week -- they haven't won after the bye week since beating Baltimore 34-26 at PBS.

Kevin Huber comes from a family of kickers, ranging from sisters playing soccer, to his father punting for Xavier university and his brother punting in high school and Mount St. Joe.

And finally, a friend of mine recently became a grandmother. Her son, a former quarterback with Dayton Christian school, had a healthy baby boy a few months ago. Mother, father and grandmother are all doing great. Here's father and son, wearing their Bengals gear with pride. 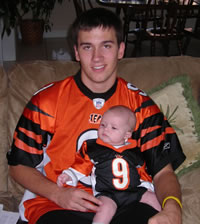 If you have stories or pictures you want to share, you can send them to me, or create a FanShot.