Houshmandzadeh's departure might have been the best off-season move; Carson Palmer for comeback player of the year; Bengals overrated?

Share All sharing options for: Houshmandzadeh's departure might have been the best off-season move; Carson Palmer for comeback player of the year; Bengals overrated?

Reader WhoDeyDerek brought up the point in the comments of Jake's Links and Notes, saying that with T.J. Houshmandzadeh's departure, "a negative presence is gone" (that's right Derek, I'll make you famous). I think there's truth to that. A lot of it. When Houshmandzadeh was in Cincinnati, a lockerroom distraction was always sensed. How would I know? Well, I really don't. Just that after he left, we suddenly now have this mature group on our hands that looks much more positive. There's also this December post in 2007 which says, "A league source tells us that there is growing animosity in the Bengals locker room toward receivers Chad Johnson and T.J. Houshmandzadeh. Per the source, both are yelling 'all the time' at quarterback Carson Palmer" and even concluded that the "two receivers are trying to 'run the team.'" Houshmandzadeh then goes on to talk trash with the Chicago Bears general manager Jerry Angelo. That personality isn't in the lockerroom so you have to believe that the growth this team has showed was the result of a subtraction of one it's most negative players.

I'm not here to rip on Houshmandzadeh, who feels more at home in Seattle not having poor-ass people in Cincinnati beg for autographs. Good for him. I'm happy for him and his 1-3 Seattle Seahawks. However, I think there's far more truth in that Houshmandzadeh's departure opened up this belief that the team lost a negative influence that constantly chipped away whatever positive frame of mind they had. You can almost see that in the squad already. There's a team-like attitude that's so strong it's making us take a double-take, making sure that this is our Cincinnati Bengals.

The one thing I haven't understood about ESPN's blogs, is that they're still so disassociated with the core of bloggers out there, that they put their crucifix on their doors before going to bed at nights. Not that its advisable that you should take ESPN's blogs as a template of how to write. When you become strictly an informative blog, you're kind of not a blog. You're more like a self-imposed Wiki; or a team page with shorted posts. Blogs tend to be more opinionated -- they are, for the most part, a diary. And if you really believe in the era of blogging, then you have to not just acknowledge blogs for their related tabled discussions, but, you know, support them. ESPN's blogs aren't the only ones that fail to achieve some full-fledged heart and soul to gain passage into the blogging universe. A lot of people do. And it ticks me off. In this case, I don't blame James Walker. I think this is an ESPN thing. Why point out to the universe that we, or another credible and hard working blog exists, when you can monopolize the entire genre. Sorry. When I started this sentence, it actually started with the the next paragraph. That's the world of a Kirkentangent.

Fox Sports' Alex Marvez names Carson Palmer the comeback player of the year through the first quarter of the season.

Yes, Brady grabs the headlines and is a worthy choice coming off a serious knee injury. But Palmer has also been impressive after missing 12 games last season with a damaged elbow. Palmer led game-winning scoring drives the past two weeks against Pittsburgh and Cleveland for a team that would be 4-0 if not for a fluke opening loss to Denver. Palmer's play is going a long way in breaking the culture of losing that has enveloped the Bengals since the early 1990s.

Marvez also names Chad Ochocinco as one of five players we shouldn't have doubted. We never doubted him, did we, Tim?

Tank Johnson has plantar fasciitis in his foot. That's the same injury Rashad Jeanty dealt with last year and the one that Eli Manning is dealing with too.

The News Record's Peter Marx thinks that the Bengals are overrated and not very good; claims that the Broncos aren't very good either and that's why they're 4-0.

Paul Daugherty, on Sports Illustrated, talks about Chad's newest book. You get the feeling that Daugherty and Chad's relationship hasn't really been on good terms for a while now.

I like to think I watch the games and understand what's going on. But WDR sees things that I'm not, which is good -- an extra set of eyes always makes us more informed. However, I didn't get Tom Nelson being bulleted as the third "good thing". Nelson has been inactive in the first three games and played against the Browns thanks to Roy Williams' forearm injury. Nelson did record a special teams tackle when he ran Jerome Harrison out of bounds with under two minutes left in the game.

Make sure you vote for Chad Ochocinco's (kinda) one-handed touchdown reception against the Cleveland Browns for this weeks Sprint's Can't-Miss Plays.

The Cleveland Browns trading away Braylon Edwards hurts the Bengals. Now they're going to have a receiver that can actually catch the football.

With the Bengals playing the Baltimore Ravens this weekend, that means we'll see former Bengals wide receiver Kelley Washington. And that means we fire up the old Squirrel Dance!

A reader sent this photo of the Baltimore Ravens. Terrell Suggs is such a beautiful swan, isn't he? 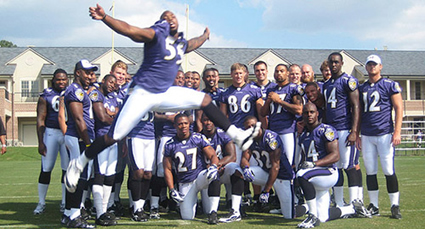