Share All sharing options for: Was Shayne Graham's Kick Good? 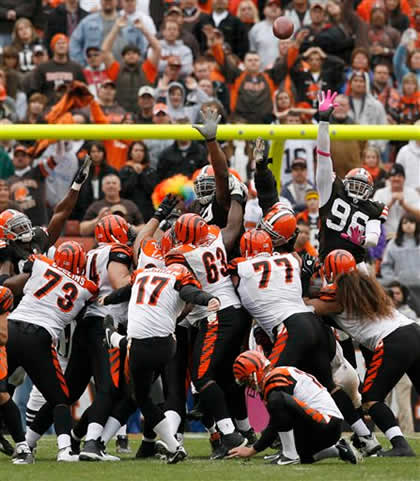 I'm actually surprised this wasn't brought up a lot earlier in the week because now it kind of rings of sour grapes, but Cleveland Browns defensive coordinator Rob Ryan doesn't think Shayne Graham's game-winning kick was good. To be honest in fact, the angle they showed on the broadcast seems to support his cause.

"You can watch the tape," Ryan said Friday. "I'm not saying anything, but man, maybe the posts were crooked. Look at it."

Ryan goes onto say he doesn't want to get fined, he just wants someone in authority to look at it. While he might have a point, the timing is off. This should've been done on Monday, not two days before Week 5 is played.  I'm not sure what the NFL could actually do anyway.  If they find evidence the kick was no good, would they overturn the ruling on the field a week or so after the game finished?

If so, that's a first.  Here, watch it again and see what you think.