Marvin to Chad: Hold the Mustard

Share All sharing options for: Marvin to Chad: Hold the Mustard 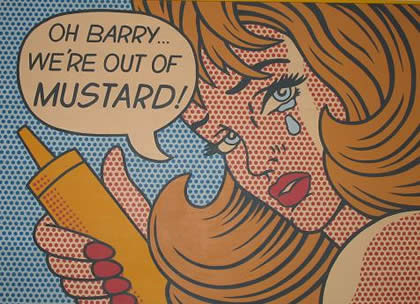 In a move that will certainly please many of you, Marvin Lewis has put the kibosh on Chad Ochocinco's latest attempt to rile his opponents.  Seeing how the Pittsburgh Steelers play their home games at Heinz Field, Ocho thought it would be a neat little dig if he sent them some mustard, much like the deodorant care packages he delivered to the Ravens.

Well, Lewis found out and put a stop to that nonsense, much to the delight of many Bengals fans, I'm sure.  Count me among those who likes Marvin's decision.

Normally, Chad's antics don't bother me, but this Sunday's game is particularly huge and it would be nice if we could focus on the actual game instead of trash-talking and one-upmanship.  Obviously, Lewis feels the same way.  Granted, this is part and parcel of how Chad conducts business, but it's nice to know Coach Lewis still has sway over the most outspoken and noticeable player on his team.

In other news, in light of the mustard denial, there's this sign discussing NFL Rule #1059, which warns opposing defenders about the risks of trying to cover Ocho man to man.  Apparently, it's on display at Chad's locker.