Three things happened. One, we posted a lengthy midseason review on Wednesday that we wanted to keep in your peripheral vision so that more readers will see and comment on it. Two. I got two brand spanking new video games within the past week. Call of Duty: Modern Warfare 2 and Dragon Age: Origins. Three. I was off work yesterday, which meant a whole lot of #2 (go ahead with your Peter Griffin laugh). All things considered, we have a lot to get through today.

Bengals players nominated. On Wednesday, player of the weeks were announced by the NFL. In the AFC Dallas Clark won on Offense, Tyrone Carter on Defense and Stephen Gostkowski on Special Teams. The Bengals did receive two nominations this week. Cedric Benson on offense and Johnathan Joseph on defense.

If we're forced to look at the Wild Card. Even if the Bengals lose to the Steelers, there's an interesting dynamic here that could reverberate for the rest of the season. The Houston Texans (5-4), Baltimore Ravens (4-4), San Diego Chargers (5-3) and New York Jets (4-4) would be fighting either the Bengals or Steelers for two wild card spots. The Bengals already lost to Houston, swept the Ravens and have the Chargers and Jets on tap.

While some call it an easier schedule, it doesn't make it any less critical. In fact, I feel I'd rather the Bengals have a tougher schedule. This team seems like the team that raises the ante when challenged. What we saw against Cleveland earlier this year scares me.

Time to start thinking about a contract extension for Johnathan Joseph. I felt very strongly naming Johnathan Joseph and Leon Hall as the team's Defensive Player(s) of the Midseason. Not only are they on one of two teams with "two players with at least four interceptions", they "are tied for second for most interceptions in the AFC behind Buffalo's Jairus Byrd, who has seven." Leon Hall has the third most tackles among cornerbacks and one could argue that their coverages have enabled pass rushers the additional time needed to get to the quarterback.

Johnathan Joseph will enter the final year of his five-year contract in 2010 and it's time to start thinking about an extension. I know what you're thinking. It's a bit soon. I disagree. Once the season is over and if the Bengals and Joseph go through an entire offseason without conversation, then Joseph will feel insulted. With players as young as Joseph, whose biggest contracts usually come after their rookie deals (save for the first five picks of any NFL draft and elite superstars), the Bengals should reach out to Joseph soon and, at least, get the dialogue rolling. Once his contract is up and he declares free agency, there's probably a very small chance the Bengals sign him back. If he does sign an extension, this offseason will be when he does it. And considering how slow the Bengals are to get things like this done, it's time to start thinking about that now.

We let one get away. There really isn't an award for something we meant to mention yesterday at our cyber-cafe awards ceremony. I suppose we could call it "Coach of the Midseason" and nominate all of the coaches, like Paul Alexander or Mike Zimmer (or god forbid, Bob Bratkowski). What we really wanted to honor is how Marvin Lewis has turned this team around a second time. In 2003, Marvin Lewis took a 2-14 team and made them 8-8. In 2008, Marvin Lewis took a 4-11-1 team, turned them into a team that's 6-2 and preparing to battle the Pittsburgh Steelers for the lead in the division. How does one award that type of turn around from a head coach twice? I'm sure you could nominate all of our coaches for something, but Marvin Lewis should get the bulk of the credit for this team's complete reversal of holy crapiness to holy crap, they're good.

Should we talk about another contract extension? Lewis' contract expires after 2010.

Quote of the Day:

"That's why they brought me here - get the ball in my hand on third down and pass-protect for the quarterback," Leonard said. "Of the two, protect the quarterback is my No. 1 job."

“Jerome is doing everything he can to try to prove that he can get out there and make productive plays for us,” Lewis said. “He hasn’t lost an ounce of his athleticism and so forth but he has a lot to learn in coming to the NFL.

“He’s working diligently. Hell, he’s got his own coach. Which is great. He’s getting personal tutoring on every single play, every single day. Just trying to get where we can be confident that the quarterbacks can be confident in him understanding everything. He’s working hard at it. But some guys come here and they have a little better knowledge of how coverages unfold and things work. And Jerome’s working extremely hard at it. The other part of it, shoot, I don’t know if there’s a guy at any position that has the skill level of Jerome.”

OK, OK, coach. Anyone else see Joe Reedy during the Coors Light commercial press conference? I don't think anyone has disputed this kid's talent. But the truth of the matter is that he's probably going to be the team's fourth receiver. He needs to get on the field sooner or later. And if he's still not capable of being on the field as the fourth receiver, then you have to do something to utilize that roster spot. The deeper the Bengals get into the season as playoff contenders, the greater the possibility is that they'll need that roster spot on the field.

Bengals, no longer a finesse team, will beat the crap out of you. I've always wondered how Football Outsiders obtain their analysis. I don't mean the people. They're brilliant. I mean, do they watch game tape? A recorded broadcast? Or do they have access to All-22 -- an angle that shows all 22 players throughout the play. Can you imagine if we had access to that?! The analysis would be ridiculous. That's all we'd do -- once we tire of Modern Warfare 2 and Dragon Age... of course.

"Hello."
"Yea, bossman?"
"What is it, Josh."
"Yea, got the tape from last week's game. Going to take off work to check it out."
"You've got to be kidding me."
"I know!! I actually got the tape."
"Josh."
"Well, it was a sloppy win. But a win is a win, right?"
"Josh."
"I really want to watch the pass coverages and how offenses react. I need one of those video tape dial thingys that slows and rewinds the plays."
(sigh) "Fine. I'll see you tomorrow."
"Actually, can we make it two days."

With that said, Football Outsiders wrote a piece on the Cincinnati Bengals' offensive line.

It's typical to think of teams with great passing games and previously ineffective power blocking as "finesse", but any opponent harboring that assumption about the current Bengals is making a very big mistake. This is as much a power team as any AFC North bully could be, with its stacked lines and inside running, and the schematic variations tell the story of a line with great confidence and continuity. If the Bengals capitalize on their hot start down the stretch, the line will be a major factor -- with or without Andre Smith.

All Bengals fans should read this Bob Labriola piece on Steelers.com, briefly explaining that the history between Pittsburgh and Cincinnati is a lot richer than you might think.

I was a part of The League panelists on Wednesday talking about Larry Johnson. I wrote that if Johnson wants to get back into the league, he should follow Cedric Benson's lead.

James Walker's biggest disappointment in the Bengals on his Midseason Report is that Andre Smith hasn't played yet. That's it? That's it.

Chick Ludwig thinks of ways to bring Maurice Purify to the 53-man roster, no matter what.

Steelers vs. Bengals: AFC North Game of the Year

Remember when we remarked that Ed Reed missed a lot of tackles last week against the Bengals? We weren't the only ones that noticed.

Steve Wyche handed out some love for the Bengals in his mid-season review. Cedric Benson was named as the Comeback Player and Andrew Whitworth was "Most critical to teammates' success".

Picture of the day. A reader sent this picture (a bit blurry) of a man wearing an Odell Thurman jersey... in France! And here we thought Steelers fans traveled well. 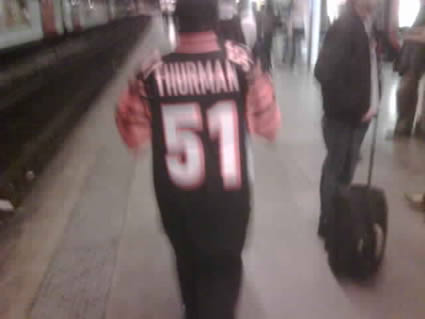 Note: if you have anything you want to share, email me anytime.