Chad Ochocinco tries to bribe an official and fails

Share All sharing options for: Chad Ochocinco tries to bribe an official and fails

Here's a question for you. How do you know that you've become absolutely comfortable with Chad Ochocinco? How do know when you've reached a point in which Chad does something and you either laugh, or shrug it off, whereas the rest of their world loses their mind? How do you know when you've reached a point that you've accepted Chad through the ups and downs of an eight-year marriage?

I'll tell you when.

When Chad holds onto a dollar bill to bribe the ref, after catching a 15-yard pass that was challenged and overturned, and you're actually disappointed that he didn't stuff the dollar bill in the ref's pocket. That's when. 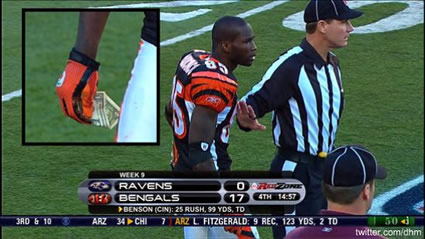 Instead, he handed it back to someone and went about his business. And business is good. After catching five passes for 66 yards receiving, Ochocinco is on pace for 88 receptions, 1,278 yards receiving and a career-tying 10 touchdowns.

People will have a problem with this. Mostly those national media types that play off the Old School Football Religion where you have to sit boringly like a rock in the desert. Then again, I have to admit something to you, my friends, my support group. Chad has actually changed me. I was a believer of the old ways. I was a believer of someone throwing the football to the refs and jogging to the sidelines (ala Barry Sanders). And maybe that part of me will never die.

But I've changed. I accept this Chad. He likes to have fun. Why not? The Bengals swept the Baltimore Ravens and my guess is that everyone in that lockerroom will see that tape and laugh about it. That's good team chemistry. That's Chad in 2009. Business is damn good.