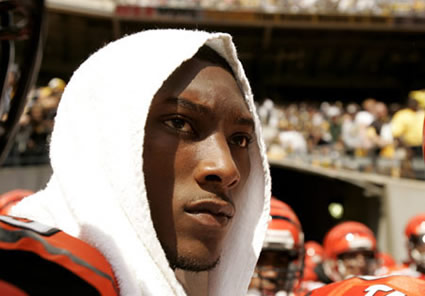 After battling for his life for several hours, Chris Henry passed away at 6:36 this morning.

Reports began to surface that Henry suffered serious injuries during an accident in Carolina, where his fiance's family lived. During what's being regarded as a domestic dispute, his fiance began leaving in a pick up truck. When the truck was leaving, Henry jumped into the bed. The police report said, "at some point while she was driving, Mr. Henry came out of the back of the vehicle."

Henry was taken to Carolinas Medical Center-Main, the local trauma unit, where he was placed on life support where his family later joined him. He died Thursday morning.

His story through adversity is documented. In 2008, after his last off-the-field issue, Henry began perhaps the most impressive transition into an outstanding young man. Not only has people taken noticed, but Henry became the model of second chances in the NFL. Anthony Munoz said, "You root for guys like that. You understand what a great opportunity he had, and you had to root for him." Many of his teammates, including Carson Palmer, took him under his wing to help guide him when he rejoined the Bengals in 2008. Palmer invited Henry to California to workout and Henry joined him. John Thornton said, "I feel he’s a good kid at heart who needed the support of a team, and I think he thrived on it when they brought him back."

By 2009, hesitations and character questions had dissolved when most fans only anticipated his patented long touchdown receptions he'd been known for.

If life teaches us anything, it's modesty, appreciation and humbleness. During times of tragedy, football becomes a trivial thing.

Football also unites people. Football turns strangers into friends. Football brings friends and family together. Football is the break in life where our worries are transported to a small corner in the smallest room.

But most importantly, football turns fans into family.

Chris Henry was only 26 years old.