Lord, I Hope Not

Share All sharing options for: Lord, I Hope Not 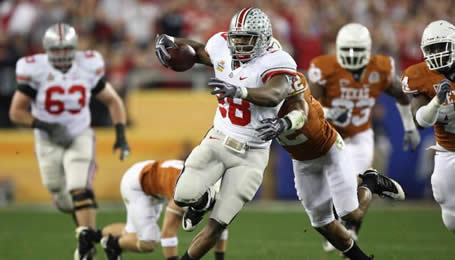 I have nothing at all against Chris "Beanie" Wells -- he was masterful in the Fiesta Bowl before his bell was rung -- but after seeing this post, I'm left with a, "No, really?" type of response.  It's either that, or I'd be using an exclamation similar to the title of this post.  The issue is whether or not the Bengals should select the Ohio State running back with their sixth pick.

Don't get me wrong, if Wells can run like he did against Texas on upcoming Sundays, he'll be a fine NFL back.  However, like we all here know, there are much more pressing needs the Bengals need to address before they go after attractive skill players.  I mean, would you want a top ten pick running behind an offensive line that too needs retooling?

Talk about wasting a pick.  I, for one, don't really want to go through another Ki-Jana Carter situation because the team couldn't keep Wells healthy long enough -- they wouldn't be able to rebuild o-line in enough time -- for him to make an impact. Besides, Cedric Benson has done enough to at least earn one more year in Cincy.

Beanie Wells with the sixth pick is just a bad/wrong idea all the way around.