Share All sharing options for: Surprise!!! Housh Wants No Part of Tagging 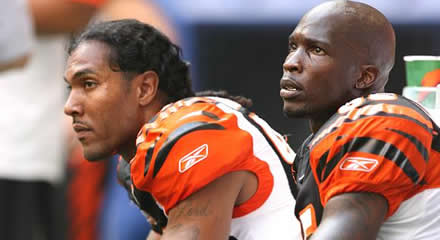 In one of the most shocking acknowledgments ever, the Bengals receiver everybody seems to covet wants no part of any "franchise tag" plans Cincinnati may or may not have for him, according to Sheil Kapadia at PFT.

Since it looks like a long term extension is out of the question -- making the resigning of Chris Henry all the more understandable (sarcasm alert) -- the writing on the wall says T.J. won't be catching balls in the Jungle next season ... unless his new team has an away game in Cincinnati.

With all these receiver questions starting to rear their ugly head (T.J.'s situation and Drew "I Won't Every Shut Up" Rosenhaus indicating he's shopping every receiver in his stable), does it change the Bengals' draft strategy in April?  What about their approach to free agency?  Obviously, addressing the offensive line is tantamount, but if Carson Palmer doesn't have anyone to throw it to, all the pocket time in the world won't make much difference.