Share All sharing options for: Rosenhaus on Ocho's Offseason 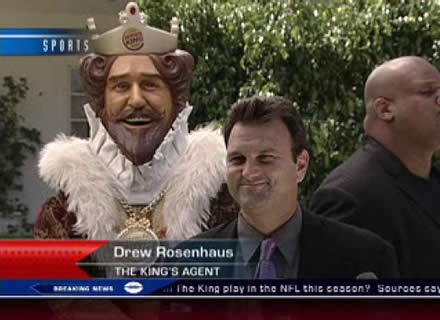 The Mouth that Roared who represents The Receiver Mouth that Roared is talking about Chad Ocho Johnson Cinco's offseason plans, once again inviting a "please shut up" reaction from most Bengal supporters ... Well, at least me, anyway.

Said Rosenhaus: “You know, here’s the deal with Chad. Last year we were very outspoken about what we wanted. This year we are going to operate behind the scenes. The bottom line is that’s a communication thing that is going to take place completely between myself and the Bengals organization.”

How about this for a behind the scenes activity: Johnson gets rid of the agent responsible for filling his head with nonsense, nonsense COJC acted on with impunity last summer? Is that too much to ask? Look, I understand the value of getting all you can from an NFL team, considering the lack of guaranteed contracts and the average shelf life of an NFL player.

That does not mean these things should be done at the expense of team chemistry.

Oh, who the hell am I trying to convince?  Does anyone really think Drew Rosenhaus gives one damn about a team's chemistry when he starts filling his clients' heads with delusions of dollar signs?

One would hope a player like COC Johnson could think and speak for himself, while only using the services of an agent during, oh, I don't know, contract negotiations.  Instead, Johnson Cinco let Rosenhaus control his every move last summer, completely disregarding that whole public perception thing, and it looks like he's going to allow that to happen again this offseason.

And if you don't think public perception counts, think again.

But remember, this time will be different because Chad said he'd be quiet this summer.  Of course, that doesn't account for Rosenhaus' mouth. Once again, it looks like the Bengals are faced with another summer of discontent.  The whole T.J. saga probably won't end well and now we have Rosenhaus running amuck again -- or at least vocalizing his intentions to do so.

Apparently, a quiet, productive offseason is too much to ask if you root for the Bengals.