Protect Him or Arm Him?

Share All sharing options for: Protect Him or Arm Him? 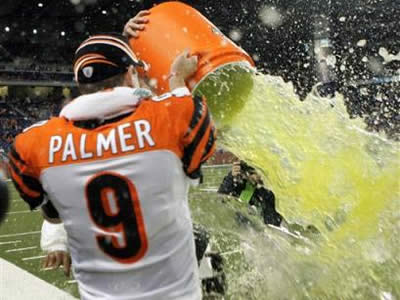 As the Bengals face the very real possibilty of losing the bulk of their receiving corps to free agency and potential trades -- also, Cedric Benson -- the question is, what should Cincinnati do in the upcoming draft? Do they eschew the skill positions, regardless of who goes where, and focus on building an NFL-quality offensive line in order to protect Carson Palmer or do they go after the Michael Crabtrees and Beanie Wellses of the world?

At first, I was against the idea of drafting Wells (and Crabtree), but the Bengals are facing the potential losses of Ocho Johnson Cinco, Housh and Benson and it got me thinking: Is it better to build a wall around Palmer or give him some weapons to fight with? Personally, I'd like to see the Bengals go after an honest-to-goodness offensive line first. The defense and the skill positions can be addressed in free agency, or, if worse comes to worse, future drafts.

Let's see what you guys say: