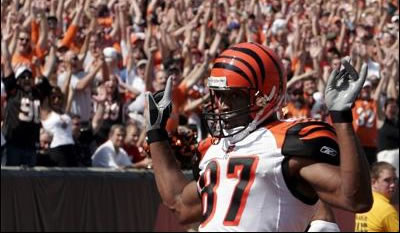 Sometimes in our moments of prophet visions, we actually hit on something that we proudly point to and say, "yep, we thought that all up by ourselves." It's rare. Actually, it never happens. For example, when we predict the team will go 10-6, then they finish 4-11-1, it's pretty evident that we've never taken to the whole weather forecasting business. Then again, we're fans first, bloggers second.

Wednesday night, I asked if the Bengals should give Kelley Washington another look? The Bengals are losing T.J. Houshmandzadeh, Chad Johnson is being led around like a puppet again by Oil Slick and his "letters" to 32 teams (who writes "letters" these days?), and while Glenn Holt is still unsigned and two players on the roster that are practice squad experienced (Purify, Urrutia), the Bengals have a wide receiver roster of:

Sort of frightening, isn't it? Two are inexperienced (Caldwell, Simpson), one is solid when healthy (Chatman) and one is, well, you're just not sure what you're going to get, but he's talented enough to be as good as anyone (Henry, if you needed help to know who I'm talking about).

In truth, the Bengals wide receivers are understaffed, and very inexperienced. Back to reality for a moment. Chad Johnson is still under contract and the likelihood of trading him is still low, if not nil. Mike Brown will view Johnson as a merchandise-selling king and the argument of Johnson's needed experience and deep-threat is still relevant. It's also unlikely that anyone will offer up much in the way of draft picks after the last calendar year (off-season chatty-Kathy, career-low numbers). Therefore, why expect the Bengals to trade him when the opportunity had already closed after rejecting the Redskin's offer?

Why not Kelley Washington? We know he can do things, and we could use his depth and experience (and for the love of god his squirrel dance). This keeps the team from forcing themselves into drafting a wide receiver, which is a position that's not a desperate need compared to others, like offensive line, and linebacker. And unlike his previous stint, Washington would have more opportunities and playing time.

"He mentioned it to me (Tuesday) night and I think it's something that interests him," Speck said Wednesday afternoon on his way to the combine. "He said he liked it there, liked the people, and enjoyed playing with Carson (Palmer)."

Picking up Washington helps the team's wide receiver depth, removes whatever available argument there is about picking up a top-tier receiver in the first round, and gives the Bengals a 6'3", 218 pound split end. We're not demanding that the Bengals sign Washington; it wouldn't hurt to take a look though.