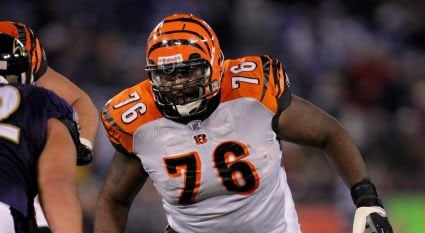 An interesting blurb in the piece that Marvin Lewis discusses balancing rookies, Bengals.com beat writer Geoff Hobson had this to say:

What isn't being said is that it looks like left tackle Levi Jones isn't coming back, but the Bengals probably won't make a move until after the draft. Instead, Lewis on Friday thought back to two and half years ago when the Bengals traveled to Indianapolis for the 2006 preseason finale and finding out that right tackle Willie Anderson had agreed to a contract extension a month after Jones did. Injuries have since driven Anderson to Baltimore and Jones to the brink.

On one hand, it was kind shocking. On another, it's expected. Jones has been a shell for the past two seasons, in our opinion, and it was only a matter of time before he was replaced.

If this is absolutely the case, then the Bengals have no option but to draft an offensive tackle with their first pick. They are in position to draft one of the better tackles in this year's class with Jason Smith, Michael Oher, Eugene Monroe and Andre Smith. We've endlessly pounded the drum that the Bengals need to draft a tackle in the first round, no matter how appealing a running back or wide receiver look -- or in some drug infested circles a quarterback. Unfortunately to those that get annoyed by repeated messages, we're not going to stop banging that drum.

Heading into the draft, and projecting the Bengals cutting Jones, Cincinnati will have Anthony Collins and Dennis Roland under contract as pure tackles. Andrew Whitworth could slide to tackle, and part of me hopes he does believing he's a better tackle than guard. The Bengals also have Scott Kooistra, but calling him the team's starting tackle would be a terrifying prospect; not that we think he's not good, it's that we think there's better options in the draft.

Jones has four years left on existing deal, with $16.3 million in base salary left.

This only reminds us the difficult to understand decision to let Eric Steinbach (a young and talented natural guard, versatile enough to play tackle and center) go while Willie Anderson and Jones received heavy extensions -- both of whom are likely to play with different teams in 2009.