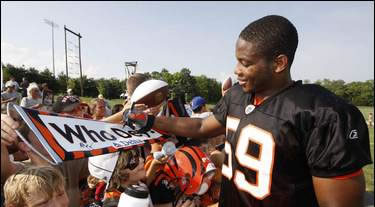 Last off-season we were questioning if the Cincinnati Bengals should hang onto linebacker Landon Johnson. From 2004-2007, Johnson averaged 98.5 tackles per season, ranking no lower than 3rd among the team's tackle leaders -- ranked first in 2006 and 2007. Stats are from NFL.com. Not bad for a guy that was never really given the starting job, unless other players went down; our linebackers have bitten the dust a lot opening the door for Johnson during his tenure.

There were other attributes about Johnson, such as versatility and his durability that were good qualities to have. Then free agency hit and the Bengals had limited interest re-signing the linebacker. Johnson eventually went on to sign with the Carolina Panthers for three seasons worth $10 million. The Bengals reportedly matched, but he left for Carolina anyway.

With the Panthers, Johnson played in 15 games, recorded 16 tackles and, well, that's about it. Just as the Panthers were preparing to cut Johnson for his $3.1 million against the cap, Carolina and Johnson agreed to restructure his contract. Cat Scratch Reader is fine with that.

Why are we bringing this up, you ask. No particular reason, actually. Slow news day. Former Bengals player that was once a tackle leader for the team now a "decent backup." What does that tell you?