Share All sharing options for: Air Knowshon in Cincy? 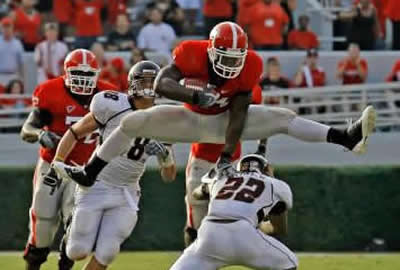 The NFL Combine is full of news, although a lot of it doesn't necessarily concern the Bengals.  The general consensus is the Bengals are going to draft an offensive line to build around Carson Palmer.  The stats show it to be necessary and the fans want it that way.

However, there may be another name on the horizon, and if the rumor has any truth to it, I can't wait to see how Bengal fans react.

The one name that has surfaced over the weekend in association with the Bengals draft pick is Georgia running back Knowshon Moreno. According to one NFL scout, Moreno would not only bolster the Bengals running game but also the passing game should they lose one or two of their receivers. He called the running back electrifying and a game-breaker.

Being a fan of the Kentucky Wildcats, I'm well aware of Moreno's effectiveness while he was at Georgia, but, much like my Beanie Wells post, I'm not sure if this is the right move for a franchise that needs just about everything except a quarterback.  Moreno was an awesome college running back, that much is true.  However, his less-than-stellar NFL Combine performance -- especially in the 40 -- is troubling.

If the Bengals do go the Moreno route, this means in the past four seasons, the organization has gone through players like Rudi Johnson, Chris Perry, Kenny Irons and Cedric Benson with absolutely no solid starter to show for it.

Not since Rudi's day came and went, anyway.

So here we are, a month and some change away from the upcoming NFL Draft and the hubbub from the Combine has the Bengals eyeing yet another running back.  Is Knowshon Moreno the answer for a team that might potentially lose the bulk of its starting skill players?  Or is this more of a "back to the drawing board" approach?