Share All sharing options for: Bengals, Darryl Blackstock come to agreement; Cincinnati has seven linebackers for 2009 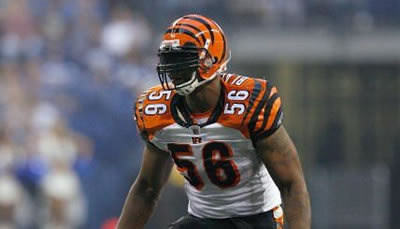 Heading into the off-season, Darryl Blackstock was set to hit the free agency market as an unrestricted free agent. He was one of four unsigned linebackers heading into 2009, three being restricted free agents, the fourth being Blackstock. On Thursday night, the Bengals and Darryl Blackstock reached a verbal agreement for a one-year minimum deal (good work, Mr. Agent). This means Blackstock will not hit the free agency market, provided he doesn't change his mind and actually signs the deal.

One half of the linebacker exodus from Arizona last offseason, Blackstock played sparingly, recording 17 tackles on defense (NFL.com credits him with 20), five on special teams in 12 games this season; he served a four-game suspension for violating the league's substance abuse policy (an over-the-counter drug with a banned substance). Against the Indianapolis Colts, Blackstock recorded seven tackles and a quarterback hurry. Blackstock started three games as a right defensive end against the Colts, Redskins and Chiefs.

In the past week, the Bengals offered one-year tenders to restricted free agents Rashad Jeanty and Brandon Johnson for $1.545 million each. Blackstock has a verbal agreement in place. Three linebackers are set to join the 2009 squad, once they sign their deals, giving us seven linebackers.

So how many linebackers have the Bengals typically started the season with? Thanks to Walrus for bringing it up (no really, I love working). Dating back to 2006, the Bengals started each season with a roster of at least six linebackers; 2006 being the only exception when they kept eight (see below).