Share All sharing options for: Housh Listed as "Overrated" 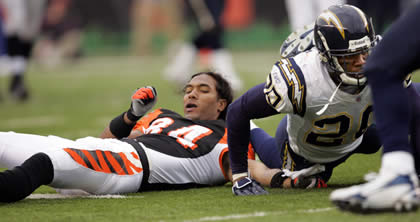 A list of the top ten overrated free agents popped up over at the Sporting News and lo and behold, number two on that list is a Cincinnati Bengals receiver you may or may not have heard of.  The reason for T.J.'s appearance on said list has more to do with the contract he'll probably demand, due to the amount of interest he'll receive, than it does with his ability.

As many as eight teams could be in the Housh Hunt come Friday, which will drive up his price. His stock is helped by the relatively weak free-agent class. He has been supremely productive in recent seasons, but he is not a game-breaker. He is smart, an excellent route-runner and a polished receiver with reliable hands. But if a team like the Giants is looking for a replacement for Plaxico Burress, Houshmandzadeh is not that guy. In the right system, for the right money, he's a good pickup. If overpaid and forced into a role he doesn't fit, there will be questions at the end of the season.

The question is, how many teams are going to want a great route-running receiver with solid hands to be their Number 1 guy?  Does T.J. strike anyone has a lead receiver or his he better off with a stud as his running mate, drawing the defenses away from him, ala Chad Ocho Johnson Cinco?

And since free agency starts tonight at midnight, where do you think the soon-to-be ex-Bengals receiver winds up?  Is he going back to Cali or do you see him catching balls from Donovan McNabb?  What about Eli Manning?

In case you were wondering, TSN has Albert Haynesworth listed as the most overrated free agent and considering the money being talked about in relation to his signing, it's understandable.