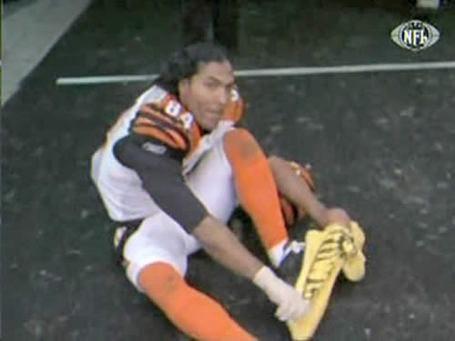 While we Bengal loyalists pray for Mike "Don't Call Me Paul" Brown to do the right thing with T.J. Houshmandzadeh, some Seattle fans would rather take their chances on unproven talent instead of the player who led the NFL in receptions two seasons ago -- and no, I'm not talking about Wes Welker either.

Here are some examples of Seahawk fans and their stance on receivers, all [Sic'd] up for you enjoyment:

"Crabtree has too much upside to just pass on him. You don't just find WR's like him. Housh isnt old, but older i'd rather have crabtree"

"Interesting argument. I still can't get past the top-10 busts at WR, though. Whichever way we go, Ruskell can't afford to be wrong. If Crabtree is the next Randy Moss/Larry Ftizgerald, then we must have him."

The rest of the discussion veers off into a offensive lineman/receiver point/counterpoint, but it does seem like the Seahawks faithful would like to try the young, albeit talented, gun instead of the proven one.  Perhaps Seattle's front office will listen to their fans' wishes, unlike the front office of a certain NFL team in Ohio. Perhaps if the voices for T.J.'s return are as loud as those Seattle voices who want Crabtree, we might see Housh back in orange and black stripes next season.

One can only hope.