Share All sharing options for: Thursday Links and Notes: Dhani Tackles the Globe, mock drafts, Chad Johnson next to leave(?) and O'Sullivan 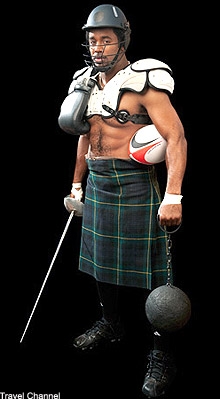 To the right, is "Dhani Tackles the Globe" on the Travel Channel.

Chad Johnson will be the next to leave?

A feature on J.T. O'Sullivan.

O'Sullivan met up with Martz and Kitna in 2007, when Martz coordinated an offense in which Kitna threw for more than 4,000 yards. Zampese worked under Martz in St. Louis and it blew him away that O'Sullivan signed with the Lions just before the '07 training camp and was able to digest the system so fast that he won the backup job in just two weeks.

Several others are suggesting that the Bengals will draft offensive tackle Eugene Monroe.

Andre Smith had a terrible Pro Day | Not doomed | Fallen | Grilled | Questioning agent. Is he now a second-round projection?

Dayton Daily News agrees that the Bengals kept pace in free agency compared to the division.