The question about Orlando Pace. Why. Why not?

Share All sharing options for: The question about Orlando Pace. Why. Why not? 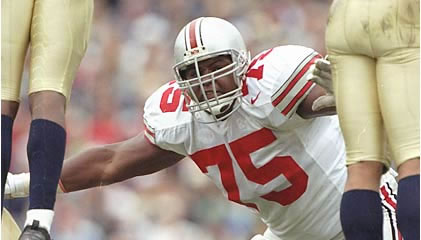 There hasn't been any substantiated rumors about Orlando Pace and the teams interested in acquiring the Sandusky Ohio native. And honestly, we're not sure how much interest Pace will generate with the first round of free agency completed and the NFL draft on the horizon. Most teams have targeted/signed their guys in free agency and are now prepping the NFL draft with whatever "needs" they feel that need to be addressed. It would seem likely that Pace won't be signed until after the draft as teams start to stock their roster for training camp competitions. From 1999-2005, Pace made seven consecutive Pro Bowl appearances and started two Super Bowls (XXXIV, XXXVI). Since he counted $8.975 million against the cap, with no more prorated bonuses beyond this season, the Rams released their Pro Bowl left tackle. He was injured enough to end 2006 in November, and 2007 in September.

So would/should the Bengals take a look?

There's two answers. Why not and why?

Let's preface this by saying, in their respective primes, Pace was noted as the league's superior tackle until Walter Jones argued differently. He's older, battle-scarred and perhaps exhausted. Who knows? Maybe he's not. However, compare him to Levi Jones, and ask yourself, what's the difference? Jones is reportedly a shell of his peak with injuries that he must prove as healed, and a cost that could release him off the squad. Pace's name is much more recognized than Jones (not true for Bengals fans), but the question remains, if we release Jones and sign Pace, where do we improve?

With that said, we believe that Pace could be in the mix with Cincinnati. The home state argument surfaces, as does a likelihood of a veteran discovering humility that may want to fight a few more seasons before he retires.

Now, it's automatically assumed that if we draft a left tackle as the sixth pick in the NFL draft, then that rookie is starting. That's not always the case. Some players drafted early in the first round just aren't ready for the NFL by the regular season -- some need half a season, some need to wait until next season. Carson Palmer did it. We're not assuming that Pace would be a starter if he signed -- like most everyone else, he'd have to compete for the job.

As of right now, the Bengals have three full-time tackles with at least two tweeners that are classified as guards, but able to shift to the end. However, if you think about the team's starting lineup next season, there really isn't certainty. Will Levi Jones stay? Is Andrew Whitworth moving to one of the tackle spots opposite Anthony Collins or staying at guard? If the Bengals draft a tackle, will the rookie be ready immediately?

The reasons we're bringing up Pace are very simple. If you're an Ohioan, and love football, then you appreciate the players that came from Ohio and have an impact on the NFL. You keep up with them. Monitor them. Yes, that includes Big Ben, Mike Vrabel and everyone else. So when Pace dominated the NFL, you pointed at him and said, "he's an Ohio boy." The other reason is that the Bengals need to keep their mind on stocking their depth; which includes talent, but shouldn't be lost with character and leadership.

At the same time, we're not suggesting that the Bengals should sign him. Yes, the argument of their limited available cap is considered and probably defaults them out of the running. Injury, age, and battle-exhaustion are strong arguments. The question about whether or not he brings more than what Levi Jones brings is debatable, but there.