Quizzing the prophesies; seven-round mock drafts or the existance Manbearpig?

Share All sharing options for: Quizzing the prophesies; seven-round mock drafts or the existance Manbearpig?

Geoff Hobson writes "the Bengals could get as many as the maximum of four" compensatory picks. The last time the Bengals had 11 draft picks was in 2004; a draft class with Robert Geathers and Chris Perry as the only remaining players -- Madieu Williams, Landon Johnson, Stacy Andrews, Caleb Miller and Keiwan Ratliff were also in this class. 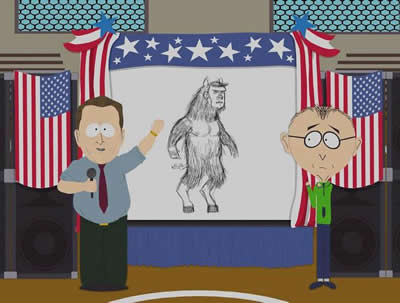 However, there's still those that think the Seahawks will pick Michael Crabtree, which benefits Cincinnati. Clark Judge has the Lions picking Matthew Stafford, the Seahawks picking Crabtree allowing the Bengals the second best offensive tackle in the draft. The one worry that the Oakland Raiders could have targeting Crabtree in the draft, is the Cincinnati Bengals. Oddly enough, we worry about that too.

Former Bengals tackle Willie Anderson still isn't considering retirement -- and the Ravens appear to be keeping him. "I might be a 14-year guy, but I've never thought about retiring," Anderson said. "As long as I can bend my knees, move my feet, don't get my quarterback killed and don't embarrass myself, I'm going to play, and I want to show people I'm still an elite tackle."

So, a pissing war is starting on James Walker's ESPN blog. He posts a Browns view of Steelers fans, and then follows that up with Steelers fans rebuttals. Both posts are titled, "who gives a damn".

Everette Brown performed at FSU's Pro Day on Monday. Linebacker coaches from the Dolphins, Jaguars and Eagles showed up, but the Bengals? Not reportedly. The point is that he's a high prospect that has been included in mock drafts that the Bengals could select. Is he even on our radar? The Steelers were all over OSU's Pro Day.

One of my coworkers sent me this this morning, a Bob and Tom prank call that is effing classic.

Paul Daugherty asks "What's the point" about the US Pole Dance Championship. Since when did anything have to have a point? Well.