No Ocho This Offseason?

Share All sharing options for: No Ocho This Offseason? 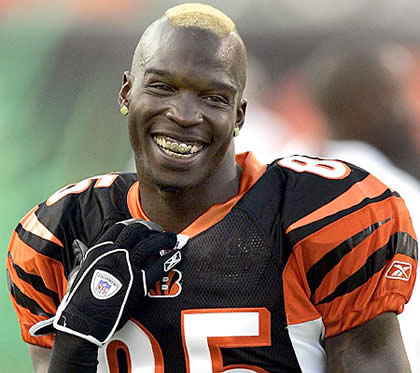 There's some uncertainty concerning whether or not Chad "Officially Ocho Cinco" Johnson will be making an appearance at the Bengals offseason "voluntary" camp (If it's so damn voluntary, why does ESPN, et al, report when folks like TO and COCJ don't so up?).  Apparently, the Bengals staff doesn't know one way or the other.

A refreshing thought, that.

ESPN blogger James Walker believes 85's attendance will speak volumes about whether or not he wants to be in Cincinnati.  Maybe it's me, but one would like to see all the receivers spend as much time with Carson Palmer as possible before the season starts.

Perhaps I'm overrating how important quarterback/receiver and receiver/receiver chemistry is.  Granted, Johnson is used to catching passes from Palmer, but if he is in a Bengals uniform next season, it'll be his first time playing with Laveranues Coles.  Maybe a little familiarity with how each other fit together wouldn't be a bad thing.

But then again, I forget which franchise I'm blogging about...  The voluntary camp in question begins next week.