Bengals "enamored" in BYU FB Fui Vakapuna; hosting a week before the draft

Share All sharing options for: Bengals "enamored" in BYU FB Fui Vakapuna; hosting a week before the draft 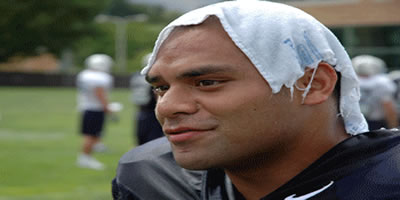 The Cincinnati Bengals are hosting BYU running back (really a full back) Fui Vakapuna a week before the draft, writes Carlos Holmes. Vakapuna, who is ironically a cousin to Naufahu Tahi, finished his career with 1,181 yards rushing, 14 touchdowns on 249 attempts in 42 games played. He's roughly in the 250-pound range, under six-foot tall and with a 40-time of 4.68 at BYU's Pro Day, where he "posted a 34-inch vertical and knocked out 29 reps on the bench press." In other words, a brick with strength.

The Bengals are known to need a fullback since Jeremi Johnson's release from injury -- and the total frustration that he was forced to workout with trainers every training camp because of weight issues he caked on during the off-season. They tried to convert Daniel Coats into a fullback during rushing downs, with Reggie Kelly splitting time as an H-back, flanking the quarterback in shotgun. All sums equaling a whole, it just didn't work out and largely contributed to the team's struggles blocking on rushing downs while struggling to pick up blitzing linebackers.