Share All sharing options for: With the 70th pick in the NFL Draft, the Cincinnati Bengals select DE Michael Johnson, Georgia Tech

With the 70th pick of the 2009 NFL Draft, the Cincinnati Bengals select Michael Johnson, defensive end from Georgia Tech. The Bengals lacked a serious pass rush, which had many pundits thinking that Cincinnati will address defensive ends in the draft.

Here are his honors.

Mocking Dan calls it a steal.

Strengths: A specimen as a prospect, Johnson has the tools to be a special player. He’s athletic for a defensive end and has good quickness off the snap. Great initial burst to beat slower offensive linemen. Incredibly long-limbed player. Can cover a lot of ground quickly. Does a good job when he keeps low and can dip under offensive tackles. Sound tackler. Does a great job getting his hands up against passes and kicks.

Weaknesses: Motor has been inconsistent throughout his career. Still has a ways to go against the run. Possesses the frame of a basketball player, which he was in high school. Susceptible to cut blocks. Some speculate he should move to outside linebacker for 3-4 team, but he might be too much of a project in that role. Good strength, but could get stronger in his torso.

Final word: Johnson’s play as a pro will be determined by how hard he wants to work. If he plays hard every play and learns more pass rush moves, he could be a consistent Pro Bowler. As it stands, he’ll enter the NFL as something of a project who will need to get stronger. Some consider him an 3-4 outside linebacker, but he would be best served by adding 10 to 15 pounds of mass and staying as an end. 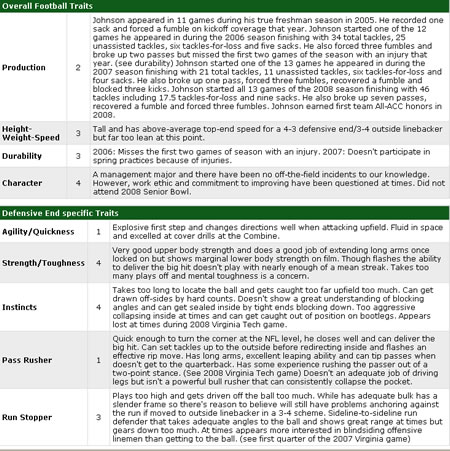