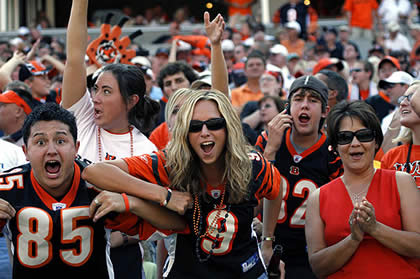 Ah, the offseason. It's a place where preseason ranking lists like Peter King's latest are actually worth something -- and by "worth something," I mean, "gives us something to talk about while we wait for preseason."  Like the description implies, lists like these are good for one thing:  agreeing or disagreeing.  The way the NFL is set up, teams with smart front offices and good talent recognition can "get good" quite rapidly.

Just ask the Arizona Cardinals.  Or the Cleveland Browns from two seasons ago.  Or the Atlanta Falcons.  Or the Miami Dolphins.

You get the picture.

With that in mind, what are your thoughts about Cincinnati's 28th-ranking?  Agree?  Disagree?  Think Peter King's full of poo?  Before you answer that last one, here are his thoughts concerning the Bengals:

I find myself liking what the Bengals have done in the offseason, with the exception of not re-signing a sure 100-catch guy in T.J. Houshmandzadeh. And though they're going to have strong personalities to handle in Tank Johnson and Andre Smith, both should make this team more competitive. Love the Rey Maualuga pick; he'll be a gem, even if he comes off the field on third down. I'd probably have them in the seven-win range if I trusted Carson Palmer to come back at his peak from elbow injury, because Cincinnati will have to score a lot of points to win.

Seems rather accurate to me, especially the part about the current offseason.  The Bengals again look like an up-and-coming team with a increasing stable of young, (hopefully) capable talent.  Granted, all it would take is an arrest or two for the negative feedback about the Bengals to start in earnest, but aside from letting Houshmanzadeh leave, the summer has been thankfully quiet.

And that includes Drew Rosenhaus' comments.

In case you are fighting mad about the Bengals current ranking, take solace in the fact that the Cleveland Browns are the the worst-rated team in the NFL.  And yes, King includes Detroit in his rankings, lest you think he intentionally left them off.