Share All sharing options for: Chad Still Can't Get His Name Right 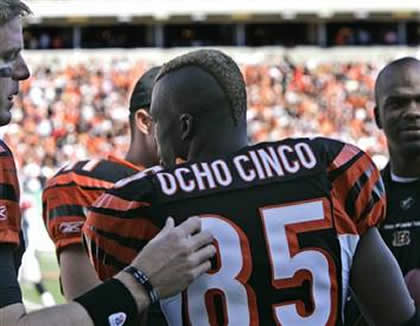 Well, Chad finally got what he wanted from the NFL: The right to have his new last name on the back of his jersey. Unfortunately, there is a catch. But first, here's a little reminder: When the name change was first announced, the NFL did not allow the jerseys to be altered because of financial obligations.

Now it's a new year, a new season and the NFL has relented.  One problem though -- when Chad Whatevermylastnameisnow sent his official documents in, he spelled "Ocho Cinco" as one word.  Because of that, the name on the back of his jersey won't look like it does in the lead picture.  Nope, it'll be Ochocinco -- not exactly the change number 85 was looking for, methinks.

This lastest chapter officially turns this whole name change saga from something surreal into laughing stock territory.  What started has another attention grab -- coupled with an actual savvy marketing decision -- has progressed to the point where, if they decided to go that route, HBO could have another pro football-based comedy on their hands.

Of course, this one would be a little more unintentional than 1st & Ten.