Alvin Keels is reportedly back with Andre Smith

Share All sharing options for: Alvin Keels is reportedly back with Andre Smith 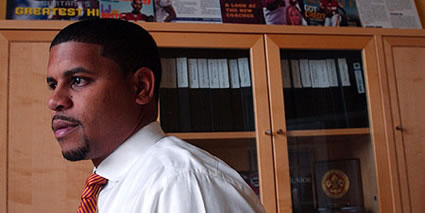 So the old news wagon pops up again. Rick Smith is out. Alvin Keels returns. Keels declines it. Ian R. Rapoport of the The Birmingham News, twits or tweets (I can't believe just I wrote that) "Wow. Andre Smith goes back with agent Alvin Keels... Axed Rick Smith. Does this craziness ever stop?"

The issue is the same as before. We realize that the big lug has talent, and that for the most part, he's kept clean. Maturity and stability are issues. However the connection is there between he and Keels. Once agent appeared, Andre Smith's questions rose. Alabama head coach Nick Saban said five days ago, “I haven’t talked to Andre or to his mom in the last few days. I would say that what Andre probably needs right now is some stability.”

This, of course, is a concern. Are they connected? Maybe. Is Keels that "stability"? If not, what was Smith? Maybe there's a connection between player and agent that we'll never get. A big brother-like figure? Who knows. And honestly, if we were talking about any other agent, this conversation is less likely. Keels is connected to Smith in a negative light simply because Keels was blamed for Smith's terrible Combine performance and subsequently fired.

Dave agrees, if this is true, it's worrisome. That's two bloggers telling you to be worried. You have no choice. Be worried, fool.