Share All sharing options for: Carson Seems Done With Chad 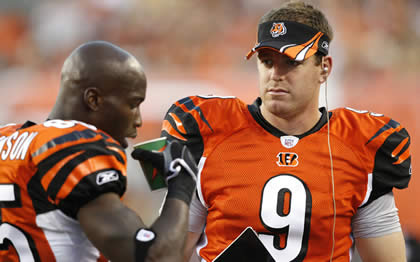 Has the marriage come to an end? Did Chad Nolastname finally alienate the quarterback who helped make him a star? Judging by Carson's interview on Sirius' NFL Network, it looks like Palmer's moving on to the receivers who want to take part in the Bengals' offseason program, OTAs or otherwise.

"It's definitely a new look for the Bengals receiver corps but I couldn't be happier with the guys we've got," Palmer said. "T.J.'s (Houshmandzadeh) gone and Chad's pretty much gone, he hasn't been here, so we've got guys that want those two spots, guys that compete day in and day out, when we're out there on the field, running, conditioning and in the weight room lifting. They're guys that want to take over for those two spots. They look every bit capable of doing what we're going to ask them to do."

Well then. I guess we know where everybody stands -- well, except, with the silent-this-offseason Chad. It's really all or nothing with the silly-named receiver. He's either all over the news or he's as silent as the morning after a fresh snow. Oh well. It's never a true Bengals offseason unless there is some kind of drama.

Hey, at least we know where Chad is.

Too bad he's more worried about making a point than being a good teammate, especially when you consider the changes the receiving group has been through.