In a perfect world, the Cincinnati Bengals have modern versions of Dan Ross, Rodney Holman and Bob Trumpy. These weren't the style of one-dimensional Tight Ends that you see today. They contributed. Reggie Kelly does. He blocks. Ben Utecht has, as a receiving Tight End for Indianapolis while Dallas Clark was either injured or split out. The terrifying truth of the matter is that no Tight End on this roster has 40 receptions in any season. Ben Utecht recorded 377 yards receiving in 2006 -- most yards of any Tight End in a single season on the roster.

The questions are multiple. Yet, surprisingly simple.

Was/Is Ben Utecht a bust? That depends on how you view bust. Did you perceive Utecht's three-year, nine million dollar contract even in consideration of "bust" territory? The basic debate of bust, or not bust, is contract first, contribution second. If he was paid the league minimum and put up the stats he did in 2008, oh well. It is what it is. In fact, many people might be forgiving because his injuries just never recovered. Not only was he given a nine million dollar deal, he was unfairly hyped as being called a "weapon" for Carson Palmer. Then there's the fact there was no Carson Palmer. No running game. Where was Chad Johnson again?

My feeling on Utecht is that:

You can disagree with me if you want. In fact, I would encourage it. That's what we're all about. My argument is simple. While we're scratching the offense's performance in 2008, we should include Utecht in that also. And it wouldn't hurt to lower expectations a little. He's not going to be the league's next best Tight End.

Chase Coffman's Role. Now, if you want to talk weapon, if you want to talk potential superstar, then talk to a Missouri fan about Tight End Chase Coffman. If any Tight End applied to the label as one-dimensional Tight End, it's Coffman. But it's not for a lack of ability. It's just lack of experience. Many times with Missouri, Coffman lined up as a wide receiver; a Dallas Clark personality, so to speak. In truth, most scouts come to the same conclusion about Coffman -- he has the chance to be a great Tight End in the NFL. 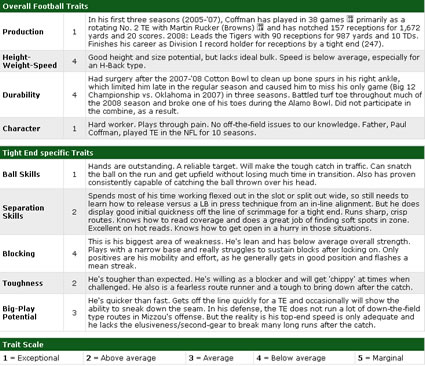 Will Reggie Kelly make the squad? My heart says yes. My mind even says yes. Of the Tight Ends we have, he's the best blocker. That's what he's known for. However Kelly is playing on the final year of his contract and depending on many Tight Ends they break from camp, as well as how comfortable they are with blocking Tight Ends -- mostly the unknown Coffman -- you really could argue the Bengals going both ways. Darius Hill is an unsigned rookie free agent, who's blocking skills were described by Sports Illustrated possessing "poor strength at the point of attack and gets minimal results as a blocker."

In 2006 and 2008, the Bengals took two tight ends into the regular season. In 2007, they took four. My guess is that they take three -- Utecht, Kelly and Coffman -- while placing Matt Sherry on the practice squad. If you hate that list, be comforted with one fact. Usually when I predict things, I get them so unbelievably wrong, it's a wonder why I even try.

Reedy: "Our story for Wednesday's paper will be on Cedric Benson, who has broken some nice runs during the workouts so far." Hobson digs into it, adds a more Palmer-centric perspective in:

Palmer can't get over how good running back Cedric Benson has looked in the workouts and he believes Benson is going to get the ball early and often. In fact, Benson has shown so much enthusiasm that Palmer is going to tell him to take it easy so he doesn't grind himself down.

"Most backs after three or four years are looking at the offseason trying to take care of their body," Palmer said. "Cedric's not doing that."

Benson says the reason he's flying around is probably because he doesn't consider himself established. He'd always been the bell cow, but since he got to the NFL and the Bears in '05 and had to split time with Thomas Jones, he's never seen that number of chances.

"I can take the load as it's dished out," Benson said. "I've kind of been doing it my whole career. I know how to do it and have enjoyed it. Nobody (in the NFL) has ever looked at my resume and decided to do what I do best."

But limitation to Benson would be a disservice to the perspectives were getting about Bernard Scott:

Sixth-rounder Bernard Scott, the running back from Abilene Christian, continues to show that he can athletically make it in the NFL. But Lewis is looking to see what he does without the ball when the pads come on.

"Very fleet," Lewis said. "He's got the skills and athleticism to be a fine, fine player. He's just got to put every part together and if he can do that other part (blocking), that will make him very, very valuable. ... You're not doing those things right now and that's something he'll have to work really hard on in training camp and in the preseason games to show that he can do that."

Reedy said of Scott that he "continues to show a nice burst of quickness."

Beautiful. Beautiful. Yes. It's May. But that doesn't mean you can't get excited about this stuff now, does it?