Tank Johnson is phasing himself into the defense. "I want to learn the defense so I don't have to think at all. Like right now, I know the defense but I don't know what we call things. As every day goes by I learn a little more and play a little bit faster." Johnson is one of those guys that the Bengals acquired during the offseason that's supposedly going to make everything better. The key theory here is that while he didn't perform as highly with the 3-4 Cowboys like he did with the 4-3 Bears, Johnson will return to the style of defense he thrived early in his career. While he might not be that offseason acquisition to give the Bengals 3-4 more wins in 2009, he does improve the defensive line.

A rule change on special teams has coach Darrin Simmons depending on guys like Kyries Hebert, who says things like, "I'm going to blow up the two guys. Soft guys run around. We blow up guys on this team. Have to. I'm trying to stay employed." Basically, the new rule change is that you won't see a wall of guys with interlocked hands ahead of the return man. This prevents, supposedly, players sprinting down the field and barreling into the wedge. “You have a 50-yard head start and you run into your garage door — that’s what it feels like,” Matt Bowen said. “It looks cool on TV, guys dance around when they get up, but they’re dying inside. It’s so much more violent than a play from scrimmage because you have so much speed behind you.” 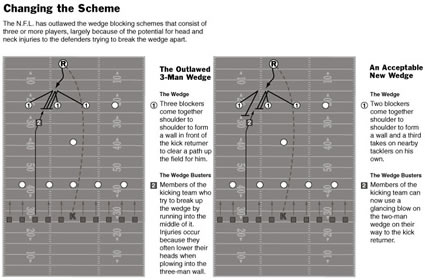 Carson Palmer was on KLAC Thursday, who clarified his comments about Chad Johnson.

‘Getting in to the whole Chad Johnson subject…you just blew that whole thing about Chad out of proportion. You read it in the blogs, I never said anything about how we don’t need him.  You read it on the blogs, it didn’t come from my mouth, it came from somebody else’s interpreting it. I said, he hasn’t been here because he doesn’t want to be here - he said that. And, he’s a damn good receiver, that’s obvious. Anyone can see that. But, the guys that are working here and busting their butt here working hard deserve a shot. When he shows up here, he’ll show up, and hopefully he’s in great shape and ready to play. But I never once said anything about not wanting him here or not wanting him. He’s a Pro Bowl wide receiver, he’s put up a ton of yards, he’s extremely dangerous to cover. We would love him.”

The Bengals are counting on Chris Henry this year.

“I’m older and more mature about everything now,” Henry said. “It’s like I did a complete turnaround with my life. I feel a different vibe from the coaches and it seems like they show me a little more respect. They know that they can trust me now. It’s all good things going on with me.”

“It is definitely time for me to show the type of person and ballplayer I really am,” Henry said. “I’ve been working hard on and off the field. I’m real focused on what I need to be doing to raise my game to the next level. That’s what I plan on doing and hopefully this will be a big year for me and the team.”

Antwan Odom, on the other hand, knows he must play better.